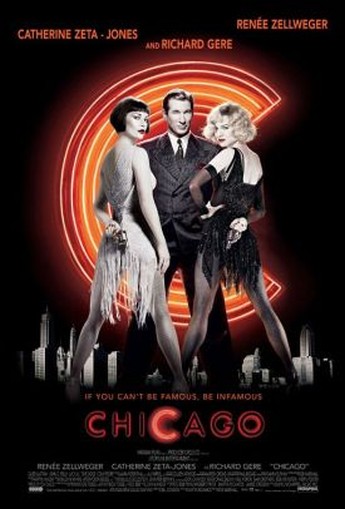 Given none of the leads were exactly well-known for their pipes or dance moves previously, this works pretty well. It tells the story of Roxie Hart (Zellweger), a wannabe showgirl who shoots dead her lover after he reveals he lied about his show-business connections, so she’d sleep with him. Sent to jail to await trial, she soon realizes that justice is indeed blind, but as prison queen Velma Kelly (Zeta-Jones) shows, murder can be a ticket to fame and fortune if you play your cards right – and if you can can beat the hangman’s noose. Helping you in both aspects is uber-slimy lawyer Billy Flynn (Gere), who will happily lie, manipulate the press and move heaven or earth to get you acquitted, just as long as you can afford his five thousand dollar fee. If not: well, you can take your changes with the rest of the legal system, which is less geared toward providing a fair trial, so much as pandering to the public appetite for death, both extra-legal and legal.

My general rule of thumb for judging a musical is, how many of the songs am I capable of humming the next day. On that level, Chicago does come up a little short, since there’s not much in the way of truly memorable songs: “Cell Block Tango” is likely the best, though we wondered how credible a black prison warden in the 1920’s was… However, the staging certainly elevates things a notch, with – of all people – Gere coming off as the most memorable. In particular, his cynical rendition of “We Both Reached for the Gun”, portrayed with Flynn as a ventriloquist and Hart as his mannequin – it was stumbling across this on cable that got us interested in seeing the whole movie. There’s nothing quite as memorable the rest of the way, but it passes a couple of hours quite aimiably, and it’s easy to see why our favourite burlesque troupe appear to be a fan of the show.