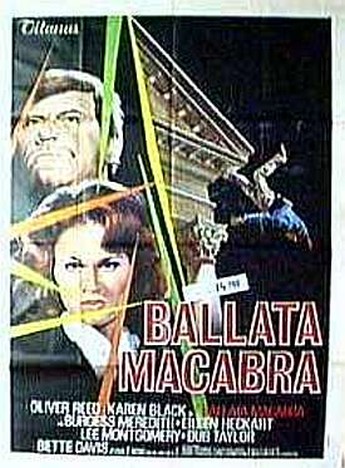 The creator of vampire soap Dark Shadows turns his hand to a haunted house movie, with a lesson that shows it’s best not to rent houses with graveyards and an unseen inhabitant in the attic from a creepy couple, no matter how low the rent. It seems obvious, yet despite a series of increasingly bizarre, violent incidents, the family here just won’t leave, and nor do they insist on meeting their reclusive tenant. Father (Reed) tries to kill son (Montgomery), aunt (Davis) has blackouts, and mother (Black) is spending an increasing amount of time with the resident in the attic, who is never seen by anyone else. When they try to leave, the trees won’t let them. Oh, and every time blood is spilled, the house renovates itself.

You and I would likely be out of there, but Reed, Black and their family stumble on, blithely ignorant, proving that dumb behaviour in horror films is not a new feature. Luckily, in Reed, Black and Davis, the makers chose a cast who raise ‘slowly going to pieces’ to an art-form, with Reed in particular showing the full range of nervous twitches and tics. At 116 minutes, it is sluggishly paced, not least because the viewer will likely be half-an-hour ahead of the movie. It makes up for this with a highly effective grand finale, but if you’re watching the DVD, do not watch the trailer first, as it has a major spoiler. No-one ever does gets burnt though.