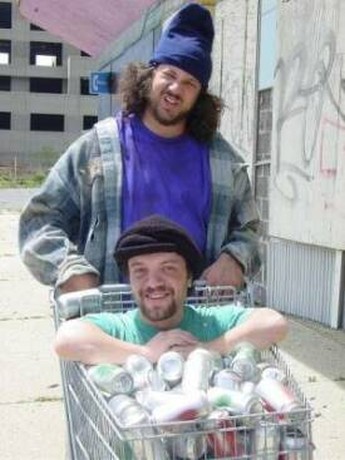 A guy gets dumped, tries to drink himself to death, but only succeeds in vomiting up his guardian angel – a pile of puke which speaks with a French accent, and instructs him on the philosophy of life. This is not, needless to say, the latest Spielberg, but one of Joint Films twisted little mini-epics. Operating out of New Jersey, Steve Herold and his associates have now put out four short films in total – and going by the above synopsis, are probably on every major studio’s black-list. Good for them…

H.R.Pukenshette is the one described therein, and is undeniably juvenile to the max, with farts and snot also in supporting roles. As the title suggests, it’s a homage to classic show H.R. Pufnstuf…which might have made more sense if I remembered seeing the original (did it ever play in Britain? The C4 website – which just distracted me for half an hour – lists it as #94 in the 100 greatest kids’ programmes, but I have no memory of it!). Even so, it’s an amusing play on relationships, and the music is especially well-done. This is really a one-joke film, but at only ten minutes long, it’s not going to outlast its welcome.

More inventive, and as a result superior, is Joint’s most recent short, Bum Runner, which spoofs the car-chase genre, using a midget in a hijacked shopping cart full of empty cans (see pic on the right, if for some reason you can’t visualise this!). There alone, you have plenty of potential to fill time, but chuck in stuff like “Crack World”, a theme-park for junkies (complete with its syringe mascot) and you have an ideal short feature for our upcoming Bumfights screening here. One character, for no readily apparent reason, wears a cardboard box on his head with a face drawn on it. This changes expression during the film, the kind of little detail which merits repeat viewing. More power to the warped minds of Herold and crew.