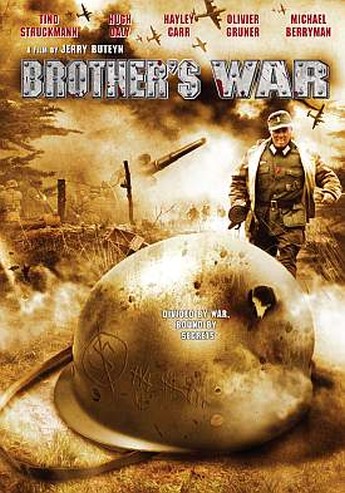 1945 Poland: the German army tried to hold off the advancing Russian forces, which are pressing on to Berlin. On a reconnaisance mission, Capt. Klaus Mueller (Struckmann) sees the execution of some members of the Polish government by the Soviets under Col. Petrov (Berryman), who are preparing to install their own puppet regime. Also a witness is Major Pearman (Daly), a British liaison to the Russians, whose report could change the whole post-war climate – if he can get back to Western lines with it. When both men are caught and jailed together, the two unlikely allies find a comment bond in Freemasonry and team up for the hazardous journey through Russian-held territory, hunted every step of the way by Petrov, to deliver the explosive information.

This is a curious animal, whose budget is not up to its sweeping, epic scale, yet which manages to avoid embarrassing itself, with a well-crafted mix of CGI and vintage vehicles, weapons and re-enactment players. It is also somewhat odd to have a Nazi as the central character: basically, the hero. Still, if The Biggest Movie Star in the World can play one, no reason Struckmann can’t, and he does a solid job at grounding the character, portraying him as a man just doing his duty, even if the obvious questions are largely unasked. Instead, it’s the Russians who are the bad guys, and it’s fun to see genre icon Michael Berryman – a man whose filmography is satisfyingly untainted by the words “romantic lead” – playing an evil Soviet.

As a card-carrying conspiracist, I was intrigued by the ‘Freemasonry’ angle, and was hoping for it to play rather more than it is – acting as a counterblast to anti-Masonic works like From Hell or Revelation, with a strongly-positive portrayal of the fraternity. Instead, it’s really only a passing aspect, without which the film would still have survived almost as well. However, what you have here is still a decent piece of entertainment: if never breaking beyond that level or providing anything more, it’s a hundred minutes I don’t find myself demanding back.