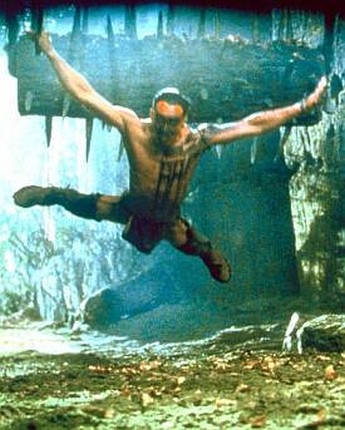 Parts of this are, let’s be honest, bloody brilliant. On the other hand, parts of this are, to be equally forthright, tediously dull. Gans can’t seem to make up his mind whether this is an action film, a horror movie, a costume drama, a political thriller or a romance, and he’s not (yet) the kind of film-maker who can switch genres like that. His strengths lie in capturing energy, not in characterisation, and it shows. Le Bihan is a naturalist sent to provincial France to investigate attacks by a mysterious beast, along with his Mohawk henchman (Dacascos).

They uncover a web of intrigue, he falls in love, they take on the beast and its masters in a series of dazzling set-pieces, so good they make you forget to question why everyone in 18th-century France (never mind the odd visiting American Indian!) seems to know martial arts. But with a running time of 140+ minutes, there’s plenty of space in need of filling, and the content is largely not up to the task. Some gleefully show-off moments of imagery, notably the one in which a prostitute’s breasts are transformed into snowy French countryside, may briefly stir you from shaking your popcorn bucket. However, you get the feeling Gans is just killing time, waiting for the next bout of le kung-fu, and the audience is likely with him on that.