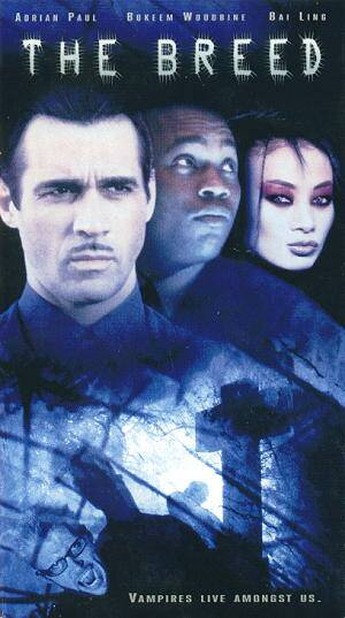 Not quite sure when or where this is set: seems to be a bizarre alternate universe, in which vampires are on the edge of declaring themselves openly. Cop Grant (Woodbine) discovers this when one kills his partner, and he must team up with their top detective (Paul) to find the murderer, who is threatening the peace before it can really begin. The film is somewhat schizoid about the lore, revamping (hohoho!) chunks, so that sunlight merely hurts their eyes, but half the characters’ names – Seward, Westenra, Orlock – come from the classics.

The same goes for the script in general, which varies wildly from the fabulous, with some genuinely creepy moments and some fine photography, to the ludicrous: Bai Ling as a panther-keeping vamp, wearing offcuts from Grace Jones’ wardrobe and way too much eye makeup. Large chunks in the middle are little more than a tired buddy-cop thriller, and Grant’s acceptance of the situation is also far too easy. Not quite sure why it suddenly shifts into Hong Kong-style martial arts action at the end either. On the other hand, Paul’s doubtful acting ability might actually work in his favour here – when you’re playing a creature who isn’t supposed to be human, a certain stilted uncomfortability is to be expected. But if you want to see this kind of thing done a great deal better, go watch Ultraviolet.