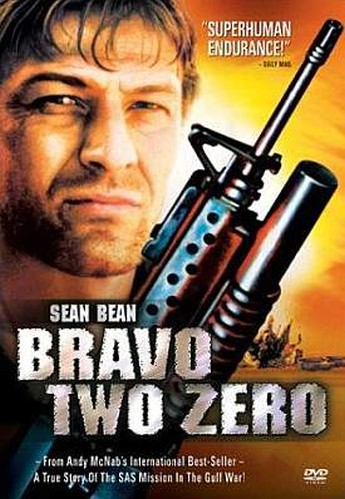 Based on the supposedly true story told by patrol leader Andy McNab – ‘supposedly,’ since there’s doubt over the extent of combat that was actually involved – it concerns an SAS group dropped deep into Iraq to cut communications lines vital to the use of SCUD missiles against Israel [this is during the first Gulf War, when Hussein was trying to draw Israel in, so that the Arab-NATO alliace would splinter]. However, their communications break down and the team’s presence is discovered, leaving them no avenue of exit except to Syria, more than a hundred miles away and over harsh, freezing terrain. Hypothermia, battles, capture and torture must be endured by the members of the patrol, with an appropriately-stiff upper-lip, if they are ever to see Good Ol’ Mother England again.

Putting all questions of factual accuracy carefully aside, while potentially a stirring tale of derring-do, this story ends up being a lot more tedious than one feels it should be. Troy Kennedy-Martin wrote the screenplay: while he’s done some great work in the past [Edge of Darkness is among the best TV dramas. Ever.], this isn’t among it, getting bogged down in a lot of military jargon. While undoubtedly realistic, this is poorly-explained and leaves those of us at home, munching on Cheetos, often wondering what the heck they’re talking about. Sean Bean is solid as ever – his presence was largely what drew me to this – and his narrative voiceovers often shed interesting light on things, especially after McNab is separated from his fellow soldiers and thrown onto his own resources. However, gaps remain; one second he’s in Abu Ghraib, the next he isn’t. While I’ve no doubt there is a fascinating story here – the book on which this was based sold a lot of copies – the movie version doesn’t bring it across.