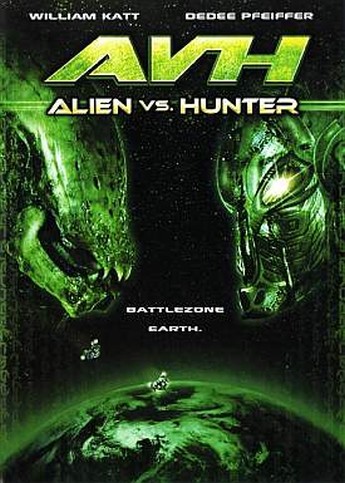 I generally can cut the Asylum more slack than most: while I wish they’d develop more original ideas, I understand their niche, and find their rip-offs sometimes surprisingly competent, or at least enjoyable on their own terms, such as Snakes on a Train. This one, however, is wretched in just about every way – and the Asylum seem to know it, with even their own site pitching it as “a gag gift” for Christmas. Veteran journalist Lee Custler (Katt) is thrown into the middle of things after an alien craft crashes near the small mountain town where he lives. This unleashes two creatures: a giant spiderlike monster and an implacable humanoid, both of whom are a serious threat to the residents of the town. Coming out on DVD a week in advance of its inspiration, the obvious touchstone is Alien vs. Predator: Requiem – and I never thought I’d see a film which would make the latter seem like a towering work of cinematic genius. However, once you’ve seen the two titular creatures, you should immediately turn this movie off, because the rest of the film has nothing left to offer.

It makes absolutely no sense: this small hamlet has a sewer system befitting a major metropolitan area, allowing people to get to anywhere in town below ground, and with pipes big enough for a 15-foot extra-terrestrial arachnid. Worse yet, it’s astonishingly tedious, simply because almost no-one in the film ever shows any sign of urgency, despite the situation: rather than acting as if pursued by monsters from outer space, they all wander around as if killing time at the mall before dinner. To their credit, the effects do not completely suck. At least, not when placed beside the other aspects such as the acting and direction. There is also a twist at the end that does at least show the creators were not entirely intent on slavish re-creation, and that’s where the Asylum strengths lie. When their knock-offs succeed, it’s where they bring something new to the table, such as War of the World, which had a human element lacking in Spielberg’s version. Here, there’s nothing except a poor imitation of a film which wasn’t very good to begin with, and the results are as dire as you’d expect.