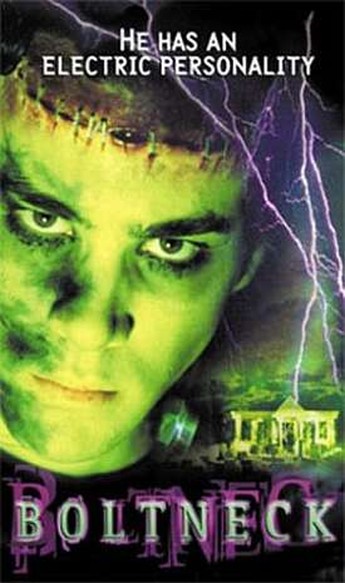 While the concept of relocating Frankenstein to high school is ingenious, the execution here gets pulled in several different directions. The individual elements are mostly handled with competence, but the horror gets diluted by the self-aware satire and teen romance, and as a result, the movie doesn’t quite work in any of them. Frank Stein (Lawrence) is experimenting with bringing dead mice back to life, but when schoolmate Carl is killed by the jocks, he seizes the chance to work with something bigger. He obtains a brain to replace the deceased’s, from his father (Judge Reinhold), a convenient scientist. Only it belonged, inevitably, to a psychopath – and the resurrected mouse is no longer behaving like the “cowerin’, timorous beastie” of the poem either.

Unfortunately, that’s where plot development largely ceases. From here on, it’s as if Carl is just another juvenile delinquent, and Frank is more concerned with getting his hands on a girlfriend, than the monster he has unleashed. Since hardly anyone in the cast possesses any charisma, and these elements are hardly breaking new ground, your interest level drops steadily. There is a lot of unused potential here: what if the brain had been that of a woman, or an artist, or even a paedophile? Instead, about as good as it gets is the monster being decried for being “too tribal…into scarification and body mutilation” – by a girl who just got silicone implants. This could be fabulous irony, but I suspect that’s giving the movie more credit than it deserves.