This plays somewhat like a French take on Buffy – if Buffy had spent about a decade drinking red wine, smoking Gauloises and developing a surly and aggressive persona. Mallory (Bonamy) is the head of an undercover special ops group, tasked with taking care of various unpleasant supernatural phenomenon. Her “Scooby gang” also includes transvestite explosives expert Vena Cava (Ribier), and a mute kid, ironically named “Talking Tina” (which may or may not be a Twilight Zone reference), who can transfer her consciousness into other hosts, taking them over. After the Pope (Spielvogel) is kidnapped, she joins forces with one of his bodyguards (Collado) and heads into the demonic realm to rescue the pontiff. Except, things there don’t go quite to plan, meaning Mallory and her team have to prevent an impending occult apocalypse. 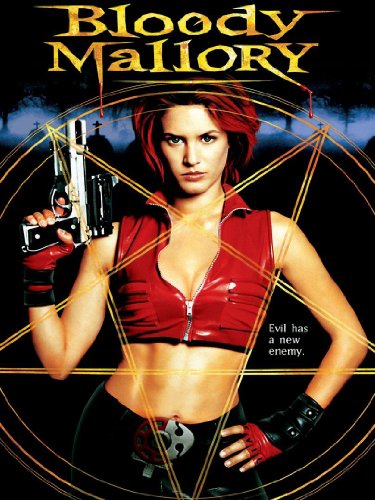 What this lacks in the budget necessary for its vision, the film largely makes up for in energy, enthusiasm and invention. Mallory herself is a glorious creation, apparently spawned after discovering she had married a demon – her ex-husband is still occasionally around, offering helpful advice. She, meanwhile, responded by dying her hair bright red, wearing gloves with “FUCK EVIL” on the knuckles, and becoming permanently grumpy. This leads her to terminate with extreme prejudice, any potentially evil entities unfortunate enough to cross her path. Excluding her husband – he has a neat trick of evaporating into a shower of rose petals – but including black cats, because as she puts it, “You never know.” She drives a bright pink hearse, because… hey, why not?

Meanwhile, on the villain’s side, his lead henchman is the vampiric Lady Valentine, with a shape-shifting associate, Morphine. There’s a bit of a power-struggle between them, and they decide who’s in charge by pulling wishbones, taken from human victims. To be honest, this feels a bit over-stuffed: there are so many cool ideas swirling around here, they can’t be adequately explored in 94 minutes. Both Vena Cava and Talking Tina have enough potential for a movie of their own, and this is crying out for a TV series, with enough room to do everything here justice. The influences here are all over the place, from Diamanda Galas to anime – the music is by Kenji Kawai, who composed the Ghost in the Shell soundtrack. And let’s just say, I suspect Magnat’s movie collection would largely be familiar to us.

Technically, it’s a bit mixed; surprisingly, the CGI has perhaps aged better than the physical effects (though I recall the latter seemed a bit ropey, even at the time of release). It helps much of the movie does not take place in the “real” world, so if things seem a bit “off”, this may even work for the film. However, even the rougher moments have charm, helped by a breezily enthusiastic approach from all of the cast. That Magnat ended up writing for The Garfield Show, while this never became the franchise it deserved, are both truly great pities.