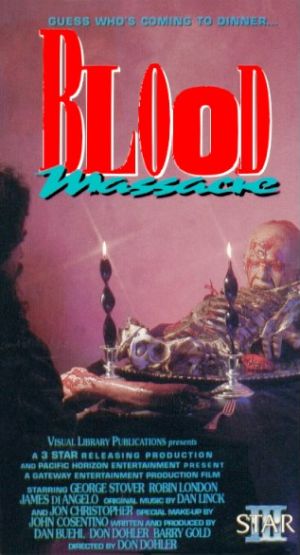 This film is one strange beast. After some aimless early meanderings, it effectively starts with a pack of criminals bursting into a remote farmhouse, and holding the residents hostage. Then, it shifts into another gear entirely, as the perps discover they’ve bitten off more than they can chew. But wait! There’s more! It then moves into Rambo territory, because one of the thugs (Stover), a former Vietnam vet, heads for the woods, armed only with some coffee-cans, a circular-saw blade and a selection of explosive chemicals. And just when you thought it couldn’t go any further…there’s one last sea-change in direction that trumps them all. I’m not going to describe it; if you’re anything like me, you’ll be howling at the moon, jaw agape, when it hits.

Just a shame the production values, in most other ways, are less than impressive. Stover appeared in a number of John Waters’ early films, giving you an idea of what to expect, acting-wise, while the limitations in camerawork, direction and overall scripting are painfully and almost permanently obvious. The FX are generally not too bad though, and if you can get past the turgid first-half, it definitely picks up down the stretch – by the end, I was actually sorry to see it finish. Dohler reworked the film as Harvesters in 2001, with Stover now playing the head of the family. That’s not a bad idea, since there’s room for improvement here: the concepts are good, deserving better execution than could be managed on the budgets and skill of the participants at the time. I’ll certainly be keeping an eye out for Harvesters.