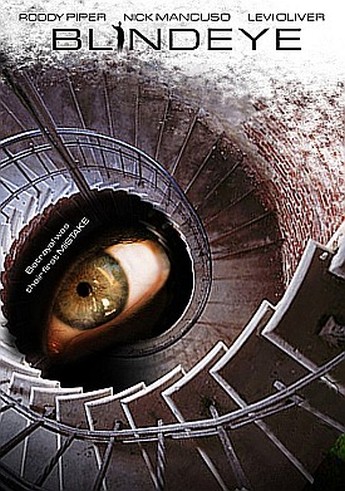 Former cop Nick Browning (Babcock), now stuck in an alcoholic rut, is called by his ex-wife after their daughter disappears. Initially, he thinks the girl may simply have run away, though his suspicions are soom raised, because the local police force seems strangely unwilling to look into the case – even his friend Jay (Hookey), whom he has known for decades. The more Browning digs into the case, the more corruption he uncovers, and he soon finds that it goes all the way up to local police commissioner Fred Mears (Piper). But who can you turn to, when you can’t even trust the cops?

Let’s be honest, Roddy Piper basically gets a lifetime free pass from us, for They Live. That said, he is probably the best thing about this, giving a nicely menacing performance as the sleazy chief who finds his little operation threatened by Browning. The problem is mostly that this takes too long to get going; the writers seem to think we have never seen the likes of the main character before, and rather than drawing him with quick, efficient strokes, they insist on grinding out every facet with laborious earnestness. Oliver, sadly, doesn’t have the necessary acting chops to rise above this material, and the result is something that lumbers from one obvious plot element to another for the first half.

It is somewhat worth sticking with, however, as the film does eventually diverge off the rather too well-beaten track, with Browning becoming an unstoppable force of vengeance in pursuit of his daughter. Okay, while at least executed with energy, that still probably counts as a cliche of the genre – if you want to see that kind of thing done well, check out something like Beat Takeshi’s Violent Cop. You can see that this is aiming for the same kind of nihilistic intensity; however, neither the script nor the lead actor are up to the task, and the end result is eminently forgettable.