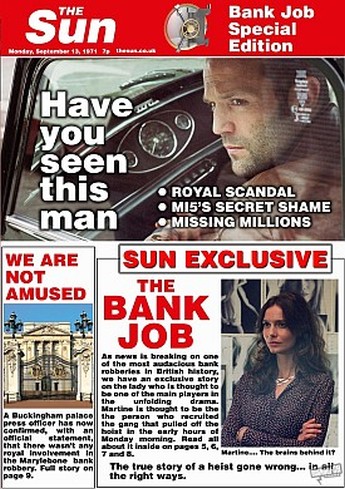 This is everything Inside Man aspired to be, yet couldn’t quite pull off: a heist movie with brains and a heart. Low-level criminal Terry Leather (Statham) gets offered the chance for the crime of a lifetime, looting the safe-deposit boxes at a London bank. However, this is far from a straightforward job, as the woman who puts them up to it (Burrows) has been blackmailed into working for the British security services, to help retrieve some naughty pics of Princess Margaret on holiday, which are being stored in the vault by a black revolutionary. As the gang begin to tunnel towards the vault, their radio transmissions are picked up by a local ham operator. Will the police find them before they breach their target? And will they be allowed to get away with the loot? Amazingly, this was inspired by a true story; a 1971 bank robbery in London, which was hushed up on order of the authorities. More info on that can be found here.

Meanwhile, as a film, this works very nicely. Statham is perfect in this kind of role, rough around the edges, yet still possessing many admirable qualities and no small degree of charm. But it’s mostly the script, from veterans Dick Clement and Ian La Frenais [who did Porridge, and more recently Flushed Away], that works exceedingly well. There are any number of agendas being pursued by the various factions present here, and yet the story keeps all its balls in the air with deft assurance, and avoids having to resort to much artificial contrivance: the characters here behave in the way you would expect them to, based on what you’ve been told. In this genre, that’s rarer than you might think, and the ending does a marvellous job of tying up the loose ends, in a satisfying manner. While not quite as inventively-sarcastic as, say, the early works of Guy Ritchie, this is a stirring tale, told expertly and effectively executed.