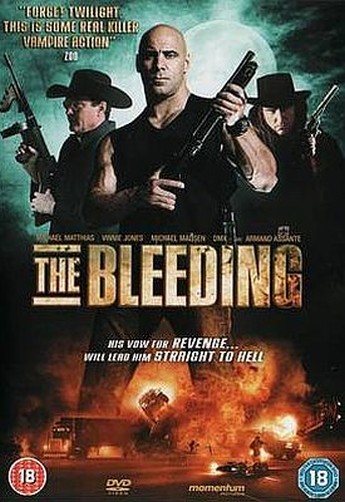 We were drawn on by the loopy insanity of a plot description, in which former soldier Shawn Black (Matthias) discovers that his brother Cain (Jones), who vanished in Afghanistan five years ago, is now the king of the vampires, and preparing to usher in a new age of darkness. Shawn, sharing his bloodline, is the only one who can stop him, as he learns from the Reverend Exposition (Madsen), who also happens to have, conveniently enough, a warehouse of blessed weapons. It’s not as fun as it sounds. Matthias is a low-rent Vin Diesel without the charisma, and Jones is stuck with a bad hairstyle and accent so horrendous it’s either dubbed or should have been, sounding absolutely nothing like his supposed brother. Picerni’s background is in stunts, and this shows, as about the only technical aspect worthy of praise are the cars, including a particularly-nice Shelby Cobra, which possesses more personality and screen presence than almost any of the actors.

But even here, the lengthy car-chase which forms the climax of the movie is remarkably dull, with some of the shots obviously repeated multiple times to stretch it out. I suppose this does save us from Matthias’s feeble attempts at acting; fortunately, Madsen is his usual reliable source, as the priest who has been waiting for the “vampire slayer” to show up, albeit without a Sarah-Michelle Gellar reference. It’s okay, we provided plenty of those. Madsen hits the right notes with his performance, projecting an awareness of how ludicrous the whole concept is, and it’s a shame the rest of the cast are unable to follow suit, as the film is much more fun when he’s about. Going by the opening credits, the aim here appears to be a comic-book style approach: however, the end product is unworthy of the name, and would rapidly be consigned to the “five for a dollar” box, in the back corner of your favourite such emporium. Given a villain who poses no threat, and a hero with no personality, the main result here is to make you realize how damn good the Blade movies were in comparison.