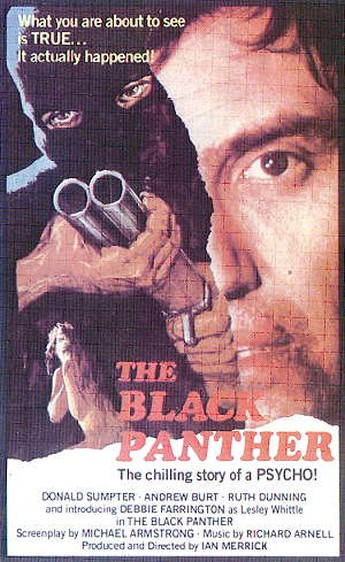 Though I was only eight at the time, I remember the 1975 case on which this film is based: Donald Nielson, a somewhat inept Post Office burglar, tried his hand at kidnapping, with teenage heiress Lesley Whittle the victim, but to no more success. Whittle ended up dead, and Nielson is still in jail, I believe. The sleeve claims “this film is all the more tense…because it actually happened”, but the reverse is actually the case – like all true crime stories, it’s limited by the fact, and there’s no suspense possible, since you know how it’s going to end. The portrayal of Nielson isn’t bad. He’s certainly creepy, and comes across as a pathetic creature.

Sumpter is, hoever, constrained by a lack of dialogue – or at least, dialogue that doesn’t involve shouting at people. You never really get much of an idea why he is the way he is; allusions to an Army fixation offer little insight into why he started robbing Post Offices. I couldn’t help wondering what the point of the movie was supposed to be, since it sheds no light on a potentially interesting (from a pathological viewpoint) character, yet neither is it handled exploitatively – save for the discovery that Lesley sleeps au naturel. The kidnap and subsequent ransom attempts are more interesting, taking on an almost farcical quality at times as Nielson’s plans go wrong in every conceivable way, and Burt, playing Lesley’s brother, offers about the only touch of humanity in the film. Essential viewing for anyone familiar with the area; the rest of us can probably pass on this without missing much.