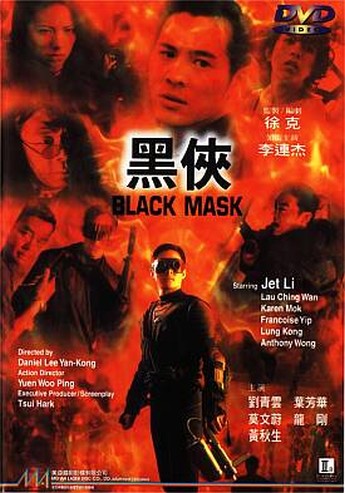 Admittedly I saw this when I was in the early throes of a relationship with a cute Chinese girl and she put this on when we first went back to her nice Docklands apartment. So my attention wasn’t exactly fixed 100% on the film. Still, I don’t think that mattered much, because although I had been keen to see this, tempted by the stylish promotional artwork, the final result is sadly lacking – in all areas but style.

Jet Li plays the lead character – a kind of avenging anti-hero who has escaped from a government ‘supersoldier’ project. His costume and particularly his mask are very 60s kitsch and you can’t help thinking of The Green Hornet. (I presume this was intended as some sort of homage but it feels more like lazy plagiarism.) Françoise Yip co-stars, as does Anthony Wong. But in spite of the best efforts of a decent cast, director Lee ensures that the finished article is something of a mess, mixing in police/superhero/fantasy elements into a decidedly unsatisfying whole. Followed by a sequel (of sorts) that stars Andy On in place of Lee and was directed by Tsui Hark.