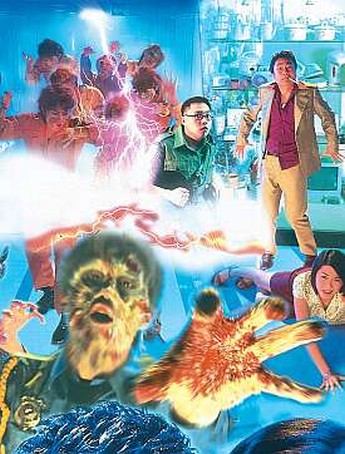 After half an hour, we were chafing at the bit due to the distinct lack of zombies. Save one scene about the sale of a chemical weapon, the film was devoted to the intriguingly named Woody Invincible and Crazy Bee, a pair of punks who sell bootleg VCDs in the mall, harass customers, chat-up girls and generally act obnoxious. Just as we were about to give up, the plots collide, setting a zombie loose in the mall as it closes. From here, things get better and better, up until an ending that’s so bleak as to make Romero weep. Sure, it’s cheap – the zombie FX in particular are entirely unconvincing – but after so many Hollywood knockoffs from Hong Kong, it’s nice to see one going the other way, giving an essentially Western genre a local spin.

Things are helped by a bunch of cool subplots, not least the geeky sushi chef, whose love for a customer extends even past death, and the nods to video gaming – when they try to escape, a crossed-out key flashes on-screen to indicate they can’t. Our “heroes” also become a good deal less obnoxious, or at least, another character appears who is worse still. But said asshole runs a mobile phone store in the mall – why not go there and call for help? The energy and inventiveness on view made us forgive, if not forget, such glaring plot holes and the first third that really could be skipped.