However, whoever designed the poster, below right, deserves at least a B+ in the marketing department. Because I’m a sucker for a blood-spattered wedding dress, and therefore, pretty much on seeing this, I was sold. Shame it bears little or no resemblance to the content of the actual movie, which is your everyday “family of psychos kidnap young women off the streets for unpleasant purposes” film. The young woman at the heart of this is Audra West (M. Gibson), who is at the convenience store buying pancake mix, when she’s chloroformed and dragged into the Abductomobile belonging to brothers Adam (Cline) and Nate. She regains consciousness to find herself chained up in the remote farmstead, having become the latest bride-to-be for Adam – the previous candidate having been found badly wanting by Mom (B. Gibson – I wonder if they’re related?). 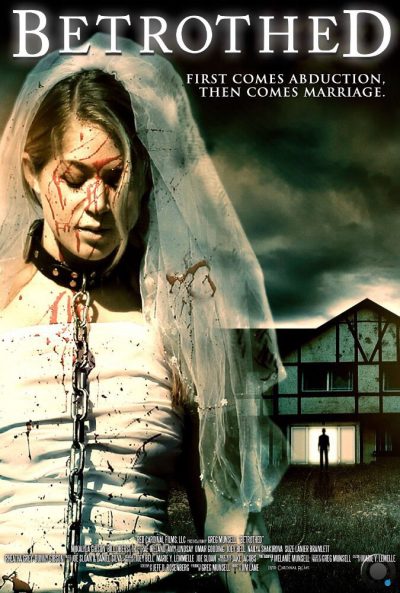 If this had focused simply on being the survival horror suggested by the advertising material, it might have had a chance. Audra is a smart-ass, but since the emphasis (just) on the “smart” side of the coin, it would potentially have been interesting, to see her use that with in an effort to outwit the dumb hicks. However, the script instead opts to dilute any interest to homeopathic levels. Instead it offers sidelights involving various other members of the clan, which appears to include everyone in the zip-code, including a gay son kept locked in the attic. Worst of all, are the multiple plodding sequences involving a detective (Ireland), who is trying to locate Audra at the request of her mother.

Indeed, virtually every scene that gets away from the basic “Beauty vs. the Beasts” premise, brings things to a halt, though interest is temporarily roused by a brief appearance from the always reliable Bill Oberst Jr. in a cameo as yet another branch of the family. The problem is, his brief performance sets an unfortunate standard to which the rest of the cast can be measured, and it’s not a comparison to their advantage.

It’s something you see quite often in low-budget films: spending budget on a brief appearance by a well-established “cult” or genre star. While it may initially improve the marketability of the finished item to have a known name on it, the downside is this will exacerbate any issues with the rest of the cast. I once heard the man who runs a long-time genre distributor mention that one of things he looks for in a film is uniformity of performances – not necessarily good or bad, just that none stand out. That isn’t the case here: after Oberst showed I up, I found myself recasting the film with other, better actors. For instance, Bunny Gibson isn’t bad as Mrs. McPsycho. But I kept thinking how, say, Lin Shaye would have been better. There’s a lesson to be learned here: that sometimes, you’re better off spending your money elsewhere.