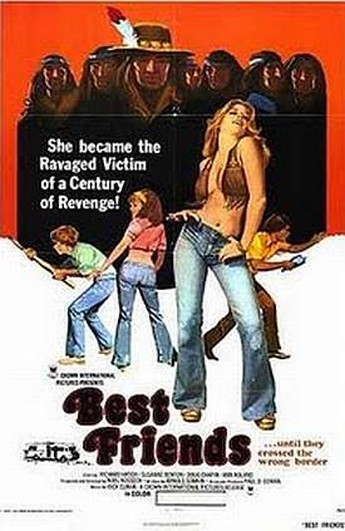 When Pat (Chapin) returns from his stint in the armed forces, he’s delighted to find his long-time best friend, Jesse (Hatch), waiting for him, along with their respective fiancees, Jo Ella (Noland) and Kathy (Benton). Rather than flying home, the four decide to rent a motor-home and drive around the country for a while, a last hurrah before the planned double-wedding. However, it isn’t long before the cracks start to show – most notably in Pat’s psyche. It’s clear he was not undamaged by his spell in the military: he wants Jesse to dump Kathy, and instead join him in crusing the country on motorcycles, living the wild, batchelor life. Jesse is not exactly enthralled by the idea, having decided its time to grow up and start acting responsible, and so rejects the suggestion. Pat decides that Kathy is responsible, coming between him and his buddy, and embarks on a plan to destroy their relationship – being willing, in the process, to sacrifice his own. The escalating tensions culminate one evening on a California beach, a night which will see things come to a violent head.

One of the joys of this series is going in without knowing anything about the movies. I don’t even bother reading the synopsis: just kick the film in and see what unspools, a refreshing change from usually having a pretty good idea of what to expect. However, it doesn’t work here, since what you have is not much more than a four-cornered love-triangle on wheels. I kept expecting the film to go in a different direction, most notably during a stop over at a bar on an Indian reservation which ends with a local being beaten with a two-by-four. I was hoping the film might become some kind of siege movie, with the wagon being circled to defend the white women from the natives. No such luck, despite the lurid poster on the right. The script goes straight back onto its soap-opera path, and it’s only in the final 15-20 minutes that things bubble to an acceptable level of dramatic conflict. It’s not hard to come up with any number of more interesting directions for this to have gone, than the one actually taken.