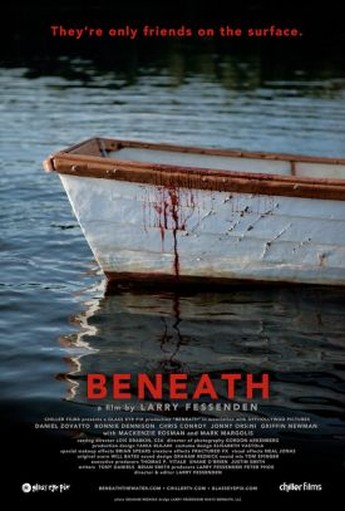 I knew very little about this going on, and we largely watched it simply because of Fessenden, who is our favourite Jack Nicholson lookalike horror director. Given this, it was a very pleasant surprise. Six teenagers head out for a weekend partying in a cabin by the lake belonging to Johnny (Zovatto), only for their boat-trip across the water to be holed below the waterline. For the lake is home to a large and nasty predator, who munches on their oars and leaves them adrift. As their situation becomes more dire, tensions rise, and sacrifices – literal ones – have to be made, in order to reach the safety of the shore. We soon discover that this is not a very nice bunch of people, and just about everyone on the boat is prepared to do whatever is necessary to ensure they don’t become fish-food. It’s like Survivor for real. With a giant fish. And on a boat. So, not very like Survivor at all, I suppose.

However, it’s still nice to see such refreshing cynicism, painting a very bleak picture of humanity as a whole, to the extent that you’ll probably find yourself rooting for the piscine antagonist, more than any of the humans. But you sense that both Fessenden and the script know it: this isn’t like many teen horror films with the characters are intended to be appealing, and just fail miserably (for those not born in the same decade, at least). These are lovingly crafted to be repellent caricatures of the tropes from B-horror films just like this, and on that basis: well done. The monster, admittedly, is far from being anything to write home about, and frankly, they’d probably have been better off not bothering and leaving it an unseen presence. For the giant fish isn’t the point at all: it’s clear the biggest threat lies inside the boat, with the gilled one simply starting that snowball rolling. The tiny location adds a claustrophobic intensity to proceedings, and it works as a sly satire on the genre, much better than as an example of the genre itself.