Madsen’s career – now cruising past two hundred entries in the IMDb, excluding TV – has largely been defined by an approach to quality control inspired by Klaus Kinski’s. “Time to pay the mortgage, Mike. Time to pay for your children’s education. Time to buy the wife a Range Rover. Time to put some groceries in the fridge.” The results have been every bit as random as you’d expect: For every The Natural (or Species 2, though that’s perhaps just me), there’s a Lost Treasure of the Maya. Could this really be no better than, say, Trail of a Serial Killer? 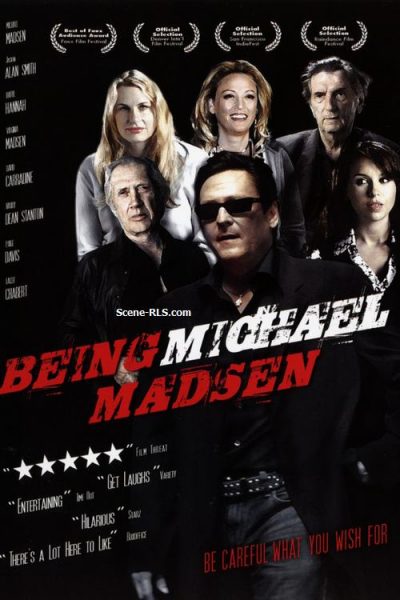 So when Michael Madsen himself says this is “probably the worst film I’ve been involved in in my entire life,” you have to take notice. It ain’t good, that’s for sure, and I can see why the closest to praise Madsen can muster is, the “original idea seemed like it might be kind of funny.” But the problem is mostly nailed by the movie’s kinda-star, when he says, “It’s not about being Michael Madsen at all.” As so often with the lesser entries in his filmography, he ends up little more than a name used for marketing power on an otherwise mediocre piece of cinema. Because I know I would never have picked this up, had it been sporting the considerably more accurate title of Being Jason Alan Smith.

Madsen is present, mostly in a series of talking-head interviews, and it initially does seem like he might be the focus. However, things drift off to be more about a film crew he hires, to stalk paparazzi Billy Dant (Smith), after Dant writes a series of increasingly salacious stories for an unnamed tabloid, eventually pushing the star over the edge after accusing him of being responsible for the murder of a young starlet. Madsen decides the sleazy journalist deserves a taste of what being door-stepped and stalked is like, so hires documentary director Mark Pollard (Tompos) for that task. Except, it turns out Dant has his own skeletons, while Pollard and his team are no better equipped to handle the spotlight of fame when it turns their way.

The problem is, these secondary characters are far less interesting than Michael Madsen, or the other “genuine” celebrities who talk about him, including sister Virginia, co-stars Darryl Hannah, David Carradine and Harry Dean Stanton. They could have been used to create a much-more compelling, if equally fictional portrayal of Madsen, up to and including the murder charge. I’m still not sure if his poetry is genuine or not – and have no intention of Googling it, because the uncertainty is part of the fun. Watching someone you know, and being unsure whether they are being themselves or playing themselves, can be enormous fun, as in Incident at Loch Ness. Watching no-names play nobodies, is inevitably going to be a good deal less interesting, especially when they have so little to say as here.