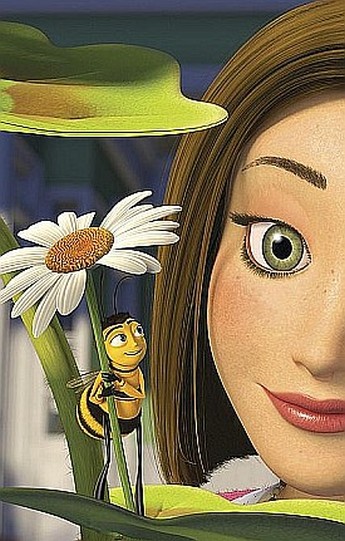 I never really grasped the appeal of Seinfeld. While I could appreciate the odd episode, I couldn’t see why it was revered so much, being named the greatest show of all time by TV Guide, for example. That may explain why this movie left me largely unimpressed: much like Seinfeld’s series, it has the occasional moment of dry wit, but is largely uninteresting and poorly-animated. Seinfeld plays Barry B. Benson, a bee who is just graduating college and is disturbed to realise he will have one job for the rest of his life. He leaves the hive and falls for a human, Vanessa (Zellwegger), who saves him. But when Barry discovers we harvest and eat honey, he launches a legal battle, suing mankind for their theft. However, the unexpected repercussions of the case threaten the entire planet.

Oh, where to start? The animation is significantly worse than A Bug’s Life, and that was made almost a decade ago – virtually prehistoric for the genre. Mind you, the creators here are apparently unaware that bees have six legs, not four [or that male bees don’t have stingers] – perhaps the additional limbs were too much for the CPU to handle. However, the main problem is the blandness of the script, which failed to engage at any point and occasionally borders on the creepy: the relationship between Barry and Vanessa is probably the most inappropriate inter-species one in a PG-rated movie since Howard the Duck. The ecological sensitivity is so ham-handed and crushing that it’s a major turn-off, as the film lumbers from one predictable episode to the next. Oh, look: there’s a cameo by Sting. Yes, that’s the comedic heights to which this aspires.