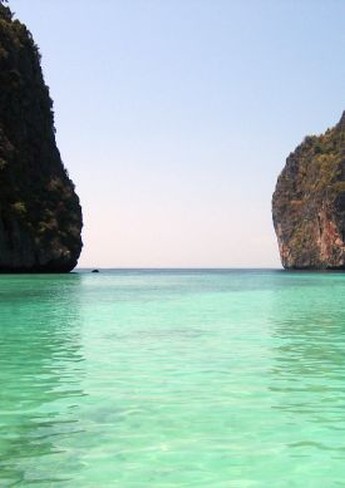 I paid no attention to this when it came out, since it looked like little more than a feature-length Bounty commercial, with DiCaprio running around with his shirt off for a couple of hours. However, I ended up reading Alex Garland’s book, on which the film was based, an early precursor to my “Kindle Surprise” project, and enjoyed it more than expected. It was closer to Lord of the Flies than Titanic on an Island, so figured I could give the movie a chance. Backpacker Richard (DiCaprio) arrives in Thailand and is given a map, showing him the way to the ultimate destination, known only to a very few. When the guy who gave him it, turns up dead, he decides to head for it, along with two French tourists he has befriended, Francoise (Ledoyen) and Etienne (Canet). There, he finds paradise, and an almost self-sustaining community of like-minded individuals who have opted out of the rat-race, for a life of hedonistic pleasures. However, every paradise has its serpent, and there are a number of different ways this one may appear, from the drug-runners who occupy the other half of the island, to Richard’s growing feelings for Francoise.

The focus of the film makes some subtle changes from the book; I think Richard gets to the island much quicker here, arriving there and encountering the drug-runners before we’re a quarter into it. The romantic angle between him and Francoise – and, indeed, the relationship between him and community leader Sal (Swinton) – is definitely more played-up, no doubt to cash in on DiCaprio the heart-throb. Could have done without those. On the other hand, I did appreciate Boyle’s injection of more cynicism: while the oh-so proudly self-sufficient islanders made a big fuss of being apart from society, when Richard and Sal went back to the mainland, there was a stream of demands, for everything from AAA batteries to The Daily Telegraph. It’s kinda fun watching Richard fall apart mentally, in an Apocalypse Now kinda way, but it’s still DiCaprio in his early days of acting. The main thing to be taken away, is probably how he has dramatically improved (and improved dramatically) during the 15 years since this, when he shows all the emotional range of a palm-tree. Lovely scenery, though.