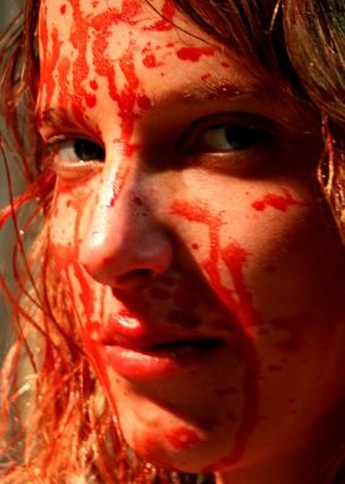 After being drugged, four women wake to find themselves in a cell at what seems to be a testing facility under Dr. Murdoch (Jordan), who refuses to discuss the aim of the test. The women have amnesia, unable to recall anything about their identities or the world outside, but it soon becomes apparent that someone – or something – has bad intent towards them. One wakes up in a pool of blood, with four digits etched into her flesh, and is brutally murdered at the time indicated by her numbers. The three survivors, Katherine (Dawnay), Natasha (Barnes) and Jane, have to try to figure out a way to avoid the same fate, or potentially a worse one. Because what the fuck – and that’s exactly the words Chris and I simultaneously used to describe it – is the thing housed elsewhere in the complex, which appears to have tentacles for a face?

The problem with movies relying on big reveals like this, is making the payoff worth the wait, and I’m not sure the script here does. Sure, it’s a big answer to the big questions; however, it seems to raise more issues than it solves. I can’t go into details without massively spoilering a key aspect. Let’s just say, it’s hard to see how the experiment delivers what’s needed, and this specific configuration seesm to serve the film’s needs, more than the stated purpose. Despite the lack of nudity, this qualifies as torture porn, since the bulk of this is devoted to watching the four women get harassed, tormented, abused and slaughtered – while there’s a fair amount of “cutaway to blood splashing on the wall,” it doesn’t skimp on the red stuff.

Particularly at 115 minutes, the movie is likely too long, though significant credit to the sound and music crew, who create an ambient backdrop, centred on the ever-present ticking of the clock, that’s unsettling and effective. The performances are decent, with Jordan suitably sleazy as the man carrying out the experiments, and Barnes perhaps the standout among the women, doing the most, out of what is basically a four-pack of clichés, character-wise. Overall, this occupies a line between SF and horror which has been crawled before – most obviously by Alien. While this is nowhere near as successful, it has enough elements to keep you watching, though the ending is more likely to provoke disappointment than satisdaction. Still don’t know what the title has to do with anything though.