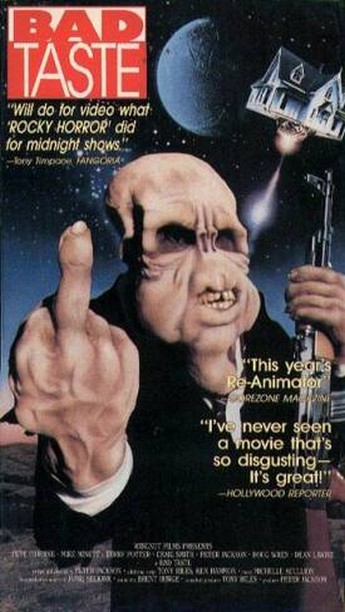 At last. Six months after being seized by the Customs, the BBFC have passed it uncut (credit where credit is due, that must have taken some bravery!) and I finally get to see it. See TC 1 for a full synopsis; briefly summarised the plot is ‘Aliens land on Earth to harvest people for hamburger meat’. Though the best word to summarise this film is ‘messy’. It’s part SF, part Stallone & Schwarzenegger piss-take, with a lot of heavy weaponry being wielded by complete jerks with spectacular results. Heads explode, cars explode, houses explode and all this on a budget of truly minute proportions.

It’s all good, dirty fun. Tongue is in cheek and the effects are up to standard. The aliens run around in human form for most of the film (obviously to save money), though when they do change, it’s done well. No sensibility is left unhit – those fond of animals will love the splattered sea-gull and sheep hit by an anti-tank missile; those with a weak spot for vomit will… Well, let’s leave that one as a surprise, shall we? The only fault is a dull gun-battle part way through which has been done so many times before it’s not funny or interesting, even as a parody. Against this, we must set the new and novel deaths. Ever seen anyone chainsawed through the top of their head and drilled out like an apple core? Wow… Splatter at it’s most delinquently stupid, this may well be the standard that Trash films will have to match in the future. See it. Just don’t eat first.