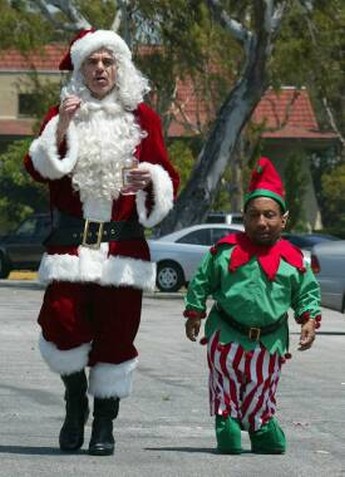 I’m all in favour of slaughtering sacred cows, and find most “regular” Christmas movies far too saccharine. Yet I couldn’t grasp the point of this at all; it just sits there on the screen like cinematic dog-vomit, unashamedly repellent. However, once the shock value of seeing Santa Willie (Thornton) and his little helper (Cox) swear, drink and leer at women, the film really doesn’t have much to offer. It’s going for the same approach as South Park, but doesn’t have anything like the same level of wit or invention, and Willie is so repellent, I couldn’t connect with him. Oh, he had an abusive father? Well, that makes everything okay, doesn’t it?

The film has its moments, as Willie prepares for his yearly heist on a department store, to keep him in booze for the remaining eleven months. But all too often, it goes for the cheap shot (such as people getting whacked in the balls) instead of anything truly subversive. What might have been more interesting is to have someone who gave the impression of being good, while secretly being an alcoholic pervert. As is, it’s inconceivable any store wouldn’t fire Willie’s sorry ass inside 24 hours, and the film generally has no credibility in the plot department. There’s a place for childish and immature, certainly, but to have any lasting impact, it needs to be mixed with genuine thought. Precious little of that is apparent here.