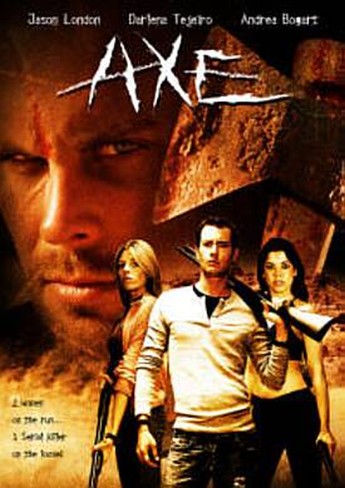 At its core, the idea here has some potential. Raven and Ashley (Tejeiro + Bogart) are on a weekend getaway, but end up with a satchel containing $300K belonging to a biker gang. Stop there. It’s all we really need: let your imagination go, and you can easily imagine how to fill 90 minutes with this alone. Unfortunately, the writers decided to “improve” things by adding a large, psychopathic escaped convict, some rock-climbing, and a subplot involving a psychiatrist of entirely no significance. We did gain substantial amusement from the way Raven dramatically runs out of ammo for her stolen gun during a chase – then is miraculously re-armed for a shootout next morning, even having spare rounds to toss to an ally. Chris decided Raven had the Incredible Popeet Pocket Gun-Clip Replicator Jacket™, a useful tool for any lady in distress.

Just as the script is a couple of rewrites short of great, the same goes for several other aspects. If the performances are not too bad, the film seems to want to be exploitative, yet wusses out when it comes to delivering the sex ‘n’ violence. The leading ladies flirt with nudity, rather than delivering, and the splatter is similarly restrained (though a bald madman with an axe should all but guarantee gore, don’t confuse this with the similarly-titled “video nasty” from 1977). However, I must admit, we were still entertained – even if a significant chunk of fun, was coming up with ideas how the end result could have been better. While there’s no doubt this has plenty of scope for improvement, it still killed ninety minutes painlessly enough.