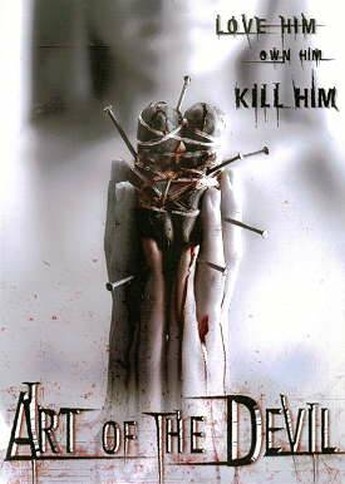 When a young Thai woman is spurned by her older lover, she plots revenge using black magic, and wipes out him and his family. However, the estate then falls to his estranged ex-wife and her children, so they then become targets for the mistress’s revenge – she also hooks on to the son, with the aim of being the sole survivor and getting her “just reward”. I can only presume this would make much more sense to a Thai audience, as chunks had us scratching our head, such as the sequence where the son is carried on someone’s shoulders in a procession, with his head shaved. These cultural queries aside, it still seems to lack something: the villainess ‘subcontracts’ her necromancy out to a shopkeeper, which renders it less personal, and there’s a randomness to proceedings that also detracts: why does one victim fall prey to 9,000 eels as he lies in his hotel bed?

As you can imagine from that, there is a certain ickily imaginative quality to the deaths, but it’s largely wasted since there are no really likeable characters – initially, it seems we are supposed to sympathize with the spurned mistress, but our sympathies evaporate, rather than being transferred to the victims of her wrath. The impact is thus limited, and isn’t helped by a clumsy structure that’s almost entirely flashback. Perhaps the most amusing thing is the ‘behind the scenes’ doc that accompanies it on the DVD: every time one of the cast mentions the dark arts, a caption pops up reading, “Please, use your own judgement”. You’d probably be wise to do the same regarding the film.