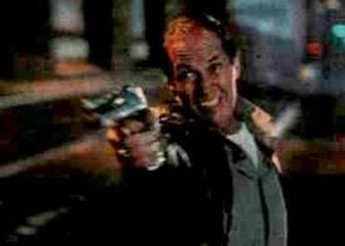 A mediocre plot is salvaged largely by a stellar B-movie cast. Heading the line are Carradine and Van Cleef, as a father-son pairing out for revenge on an excruciatingly polite Yakusa boss (Mako), after another family member is framed in a double-cross. While the irritating small child had me rooting for Mako, and it rarely breaches ho-hum on the action front, it does looks like a fair bit of money was spent on it, though I never did work out the point of Carradine’s ‘Nam flashbacks.

The joy is in seeing Carradine and Van Cleef justify their salaries, ably assisted by the likes of (pause for breath) Hagen, Brent Huff, Laureen Landon, and Michael Berryman, not to mention Dick Miller, Cary Hiroyuki Tagawa and Michelle Bauer in bit parts — or bits in Michelle’s case, since that’s in the inevitable and entirely gratuitous strip-club scene. Watching all of these just about numbs the pain induced by the script.