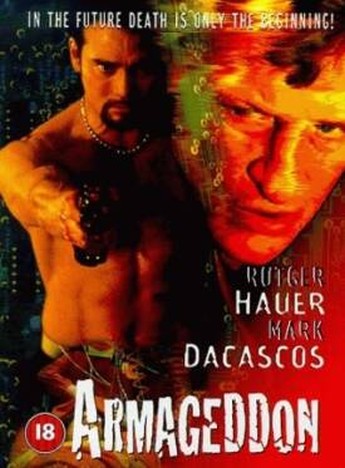 This curious, hybrid animal is a Dutch-Canadian co-production which pits resurrected smuggler Hauer against Russian gangster Dacascos, against a vaguely futuristic backdrop of political shennanigans. Frankly, it’s a mess, though fortunately surpasses the truly dreadful trailer. This is mostly because it looks very good; between them, the set designer and cinematographer have worked wonders with the budget, and it’s plausibly like a completely collapsed Russia. Journeyman director Takacs (last seen directing a Sabrina, the Teenage Witch TV movie!) doesn’t seem to know what to do with this fine work, however, though his fondness for gratuitous nudity as a fallback must be admired.

What really sinks this is a script that never rises above the cliched and banal; the fact that Hauer is back from the dead is thrown away, and the rest of the film’s potential withers and dies. In the end, Hauer and the visual style can’t withstand it, and you’re left with cheap dreck, albeit of a more than usually presentable sort.