This starts off feeling as if it’s going to be hard SF, but the further it goes (literally, as we’ll see), the more it diverges into more psychological, and arguably semi-spiritual territory. I’m kinda disappointed, as I prefer the nuts-and-bolts variety of the genre, and was enjoying those elements perfectly well. It begins on the titular ship, making its way from what remains of Earth to Mars with colonists. It should be a three-week jaunt, and a cushy one at that. For the Aniara (which I inevitably keep typing as Ariana!) is kitted out like a cruise-ship, with shopping malls, leisure facilities and an AI-driven VR facility called MIMA. This lets passengers experience their memories in an idealized version of Earth, and is run by Mimaroben (Jonsson).

The voyage is interrupted by a freak accident which sends the Aniara off-course and forces Captain Chefone (Kananian) to jettison their nuclear fuel to avoid a meltdown. This comes at a cost: they can not correct their course. The ship can only keep going, until they find a celestial body whose gravity they can use to change direction. As days turn into weeks, months and years, it’s clear that won’t happen. At least the ship’s self-contained systems mean the passengers and crew won’t starve, suffocate or die of thirst. [Though I hope you like algae. As in, really like algae…] The survival issue is mostly psychological, with MIMA becoming increasingly important – until the AI commits suicide. It won’t be the last character to do so. 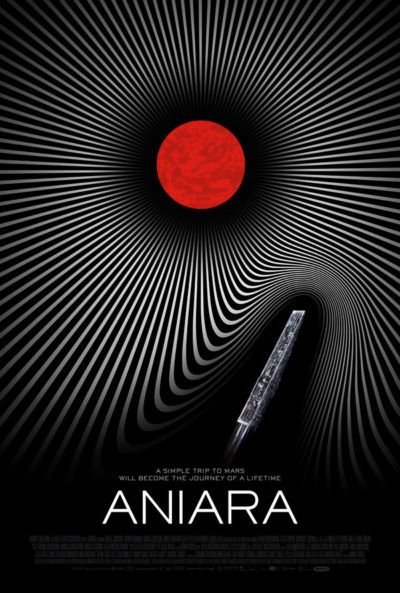 Thereafter is really where the film stops being hard SF, and becomes an increasingly bleak slab of Scandinavian angst. Mimaroben forms a relationship with officer Isagel (Cruzeito), and they have a child after a weird, cult orgy. Isagel isn’t happy about it. Things don’t end well there. What appears to be a rescue rocket, possibly containing fuel that will get the Aniara back on course for Mars, is spotted. Things don’t end well here either. Yet Mimaroben, Captain Chefone and the rest of the inhabitants of this new, little planet keep plugging on, with the business of everyday life. There really isn’t any alternative. Well, except for opening the airlock doors and going for a stroll in the cold, dark vacuum of deep space.

By the time the end credits roll, you may be inclined to do the same. As a downbeat depiction of the futility of human existence, I can’t argue against its effectiveness. The effects are actually quite impressive, especially considering the budget (per Wikipedia) was slightly below two million Euros. It’s just that it feels like a SF film directed by Marvin the Paranoid Android (“After that, I went into a bit of a decline…”). I was expecting some sense of ingenuity, like in The Martian, with the crew changing the ship’s course through cunning use of a Sodastream or something. Instead, they appear resigned to their eventual doom, and it’s an infectious kind of fatalism. The quiet whimper with which this ends, rather than any kind of bang – least of all, a big one – is appropriate. Especially for something based on a 150-page Swedish poem.