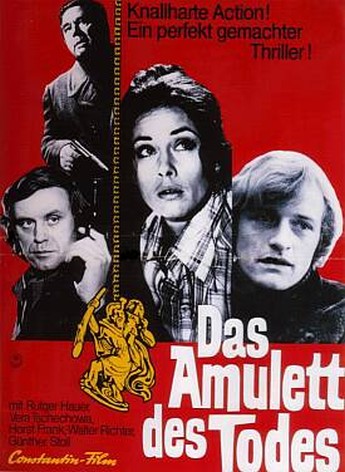 You know you’re watching a low-budget film when one opening credit is ‘Music and Special Effects By’. This is 100% accurate here, though for 90% of the movie, the result isn’t too bad. Pilot Hauer, occasionally works for a mysterious (intelligence?) organization, but wants out. They don’t want him to go: however, after he steals a case of money he should be delivering and does a runner, the chase is on. He’s aided by a woman whose life he stumbles into and hunted by his employers who want the cash back.

This feels quite a bit like Wedlock, a more recent film of Hauer’s which is also about a guy on the run with a woman, looking for loot that he’s hidden. The chief ploy in Cold Blood, however, is to keep information hidden – it starts with the heroine knowing nothing, and we only find out about Hauer and his past, as she slowly does. The film escalates nicely, until heroes and villains are in and around a ruined castle where the money is stashed. Then someone starts killing characters off with a telescopic rifle? Who is it? Sadly, once more, the answer is a lot less interesting than the questions, though what happens to the money is a nicely cynical touch. Chalk up another ‘coulda been a contender’ film. [This does have an eventually-famous cinematographer: Michael Ballhaus, who’s since done Goodfellas and Bram Stoker’s Dracula.]