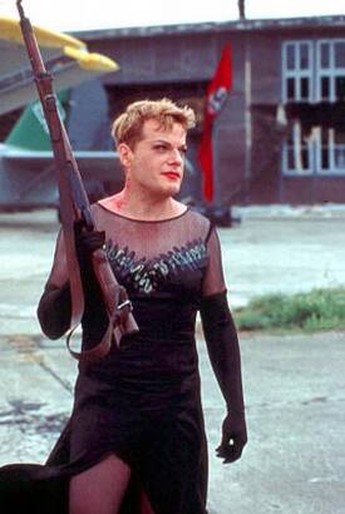 Towards the end of the war, in a desperate bid to capture an Enigma code machine, the allies send a small force to infiltrate the factory where they’re made. But since it’s entirely female staffed, the soldiers have to go in dressed as women. Hence, a motley bunch – a pen-pushing veteran (Cosmo), a geek, drag queen Tony (Izzard), “Special Agent Almost” O’Rourke (LeBlanc) – are dropped in to Germany. Only the factory isn’t where they’ve been told, O’Rourke falls in love with a local resistance agent (Krebitz) and Tony meets an old flame.

It’s an awkward stew of comedy, drama, romance and action, and the comedy is the sole part that works – largely because, unsurprisingly, Izzard is the only one who looks remotely credible in a dress. Supposedly based on a true story, the central plot doesn’t make much sense from a historical perspective, because the Allies actually had no qualms about sending female agents behind enemy lines. If you’ve seen U-571, you’ll also know the Allies already had the machine, though the movie does explain that one. There are some beautifully surreal moments, mostly involving Izzard, whose timing remains impeccable, and the film’s heart is clearly in the right place, with warm, fluffy messages of tolerance and understanding. Udo Kier and James Fox help boost the film, but you can’t help feeling the Monty Python crew would have done it better.