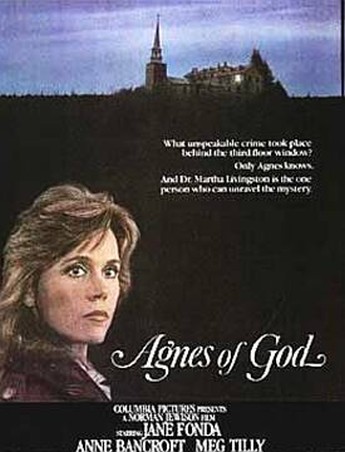 When a dead baby is found in a nun’s room, at first it seems like a clear-cut case of manslaughter, with only the question of sanity left to be decided by psychiatrist Dr. Livingston (Fonda, and yes, they make the obvious “I presume” gag early on). But the more she finds out about Agnes (Tilly, Oscar-nominated for her work here), the less simple things seem, straining her relationship with the Mother Superior (Bancroft), and also the authorities, who are mostly concerned with getting the scandal out of the way quickly and efficiently.

This was based on a play, and it shows, in that most of the scenes are simply two people talking to each other, which doesn’t seem to me to exploit the strengths of cinema – this often felt like I was listening to a book on tape. The ending should also be classed as a cop-out; Livingston spends the whole film looking for answers, yet the script drifts away without offering any. Okay, the movie is probably more about faith – or lack thereof, in Livingston’s case – and the search for it, but when you execute this in a murder-mystery setting, it seems reasonable to expect a better resolution. Fortunately, the performances largely make up for these deficiencies, keeping the film watchable enough, if a little dry – like the leftover turkey from Thanksgiving, this would have benefited from the addition of some juicy side-dishes, in order to make it more palatable.