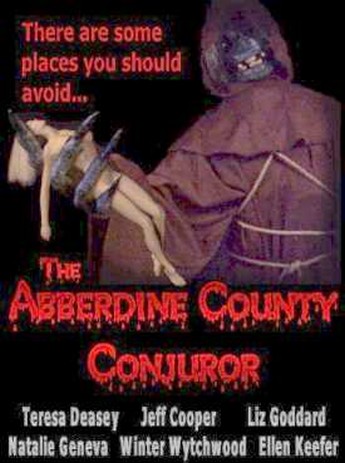 Cooper has been involved with the media industry for about 20 years; this is his first feature and, to be honest, he’s likely over-reached himself. First point: it runs for 136 minutes, and that’s not a mis-print. Most B-movies last the bare minimum necessary to qualify as a feature (around 75 minutes), allowing them to concentrate their micro-budget and get most bang for their buck. Instead, the $10,000 spent here – hardly a fortune to begin with – ends up being spread perilously thin. I don’t think the idea here is necessarily the problem: Meg (Deasey) and Mike go into the Texas back-country in search of missing friend Bev, and find themselves cut off, and under threat by a 150-year old magician and his army of zombies. But it falls a long way short of being sufficient to sustain the length required here, and we are instead bored by phenomenally dull scenes such as a woman taking a ‘magic’ potion and rolling around for what seems like forever, pretending to be tripping.

There is also far too much ‘wandering around the woods’ footage, the female characters look, sound and act confusingly similar, and the number of lengthy sequences of them being tied up and/or abused, leave me wondering about writer-director Cooper’s own predilections in this area. On the plus side, Cooper is likely the film’s best actor, playing zombie-hunter Sean Steel, managing what seems to be a fairly-convincing British accent, though one wonders what Steel’s purpose in life is. Does he just sit around the forest all day, making sure the conjuror’s zombies don’t get out of control? And, indeed, what has said conjuror been doing for the past century or more? I mean, if I could re-animate the dead, I sure as hell wouldn’t be sitting around a forest in Texas. You will undoubtedly have plenty of time to consider these issues during the two and a quarter hours it takes this to unfold.