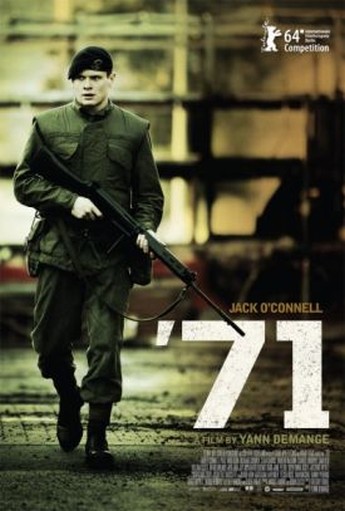 Got to thank the film for introducing me to the murky world of the Military Reaction Force, a British Army group that operated in Northern Ireland during the early seventies, effectively functioning as a death squad. Damn. There important here as one of the threats posed to rookie soldier Gary Hook (O’Connell), who completes basic training and is dispatched to the streets of Belfast. On his first mission, he and another soldier are separated from his platoon, and his colleague is gunned down in the street by a unit of the Provisional IRA. Gary has to make his way back to base, figuring out who he can trust, and who is out to get him. And, after he stumbles onto MRF involvement in a bombing plot, that might be a lot less obvious than you’d think, with even the Republican side being split into Official and Provisional IRA, who do not play well with each other.

I was too young to remember much about the “troubles,” but this does a really good job of bringing home just how grey a situation this was. The supposedly peace-keeping Army forces were apparently involved in terrorist acts, because… Well, the film doesn’t quite get into the reasons behind this, which is a little unfortunate: I had to explain to Chris some of the background and was hand-wavey on the details. But if you take those as presumably making sense, this is satisfyingly taut, even if it never again reaches the adrenalin-pumping level reached when Gary is being hunted through the eerily deserted streets and burned-out buses. The film coasts a little from there, though still has enough energy to make it over the finish line. Educational and entertaining is a difficult double-act to pull off; this does it better than most, and also manages to avoid excessive preachiness.