In the Vietnam War, the Viet Cong set up and used a massive network of underground tunnels and chambers as bases, from which they could mount attacks on enemy forces. When discovered, the Americans would send in their “tunnel rats”: small of stature, lightly-armed soldiers to kill any lurking Viet Cong, and plant explosives to destroy the tunnels. Needless to say, this was a job fraught with peril, and subject to a high turnover. The latest batch of arrivals in the jungle from America have only a brief time to get to know each other, before going into action: the Viet Cong fight back, both above and below the dirt. 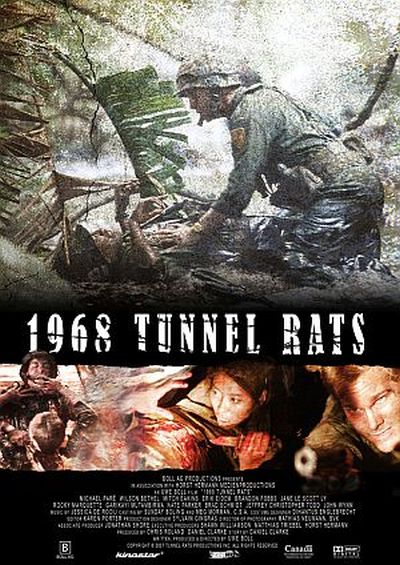 The film is at its best depicting the utterly claustrophobic nightmare of the underground battle, where the enemy might be about to attack from any angle, with booby-traps and flooding other hazards to contend with. The movie also doesn’t just treat the Vietnamese as “the enemy,” but does make some effort to show life from their side as well. For example,  after Vo Mai (Le) takes out one of the soldiers with a sharpened bamboo stake [an impressively FM!RT! moment], she goes back into the tunnels and throws up. The final sequence, where she ends up having to team up with one of the Americans after a cave-in, is surprisingly poignant and effective.

The lack of any real “names” in the cast works for it – Boll regular Michael Paré, playing the squad commander, is the only recognizable face, making it harder to pick out obvious survivors. However, the characterization of the US soldiers is badly-handled, perhaps a result of the improvisation used in lieu of a script. The night of their arrival largely consists of them trading cliches with each other about what they’re going to do when they go home, how much they miss their mom’s cooking, and other activities which, from watching numerous war movies, we know are signing their death warrants. And once they get into the tunnels, it’s basically impossible to tell them apart.

It might have been wise if Boll had also not divided our attention between events beneath and on the surface. The latter provide s little we haven’t seen in every other ‘Nam flick, though the horror of an air-strike which arrives at about the worst moment possible is effective. From then on, perhaps because the high mortality rate has winnowed down the characters, the film is a great deal better, and I have to think that sticking with one or character, giving him proper depth, would probably been more effective and memorable.