You kids these days.  You don’t know how easy you have it. Almost any film you want is available with just a few clicks: even the ultra-obscure can often be found on certain specialist sites. You try to tell ’em there was a time when we had to rely on trading with other fans by mail, dodgy dealers or a certain basement beneath a record-shop in Camden Town, risking a visit from PC Plod, and they’ll just laugh at you. Now, however, you can plant them down in front of this documentary, which collects a bunch of eye-witness testimony from the eighties and nineties. Beginning with Psychotronic Video, that literally underground film store in Camden, it rolls through a range of related topics. These include the meteoric rise of home video, the subsequent “nasties” panic, the art of box covers, legal issues, film fairs and, overall, the joy of collecting – even where many of the movies were, frankly, a bit crap. 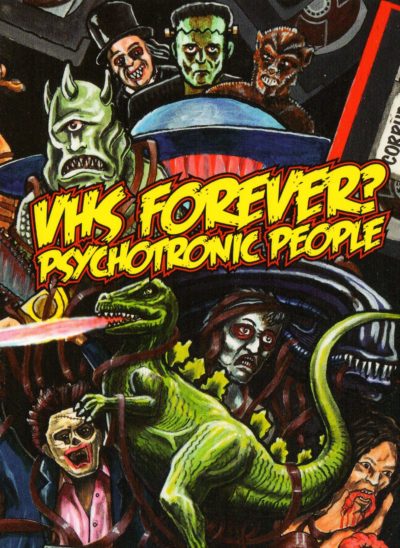 I lived through the period on which it focuses, back when editing Trash City. Psychotronic used to be part of my regular Saturday afternoon circuit through London, and I’d hang out there, shooting the shit with Tony, Lino and the late, lamented Dan. This section therefore left me with a huge, nostalgic grin, recalling the subtle dance to become “accepted” and get into the back room. Now, I was never into the whole pre-cert video-tape thing. I was all about the content, not the packaging, and (as mentioned) most of the infamous 39 titles on the list simply weren’t worth the effort. But there was enough intersection between those collectors and me, that much of the rest also resonated with my personal history. I remember very well, for instance, the nervousness whenever the rumour-mill reported raids or arrests. Quite a few names and faces I recognized popped up too, such as Kim Newman, Rick Baker and Harvey Fenton. Though I was surprised there wasn’t mention of events like Shock Around the Clock, landmarks of horror fandom, I still remember fondly.

It’s not perfect. Some of the audio is flat-out terrible; I presume it seemed a good idea at the time to have an interview in a windswept cemetery. And I’m not sure what Caroline Munro can add of relevance to these topics, beyond being adorable. Though she does at least break up what is otherwise a bit of a sausage-fest [it was a heavily male-dominated fandom. And guess what? Nobody cared]. A couple of the other interviewees – I’ll mention no names – come off as self-important dickheads. But such is the way of any fandom, and even with them, a genuine passion for the topic comes through, regardless of the rough edges. There’s a commonality to such things, which should translate to make this of interest to fans in other fields. But I suspect it will be most fascinating to those who, like me, lived through the era, hooked up two VCRs to make dodgy copies, and spent far too many hours trawling the shelves of their local video store, in search of hidden gems.

The documentary is now available to buy on DVD and Blu-ray, at https://www.vipcoltd.com/