There are two kinds of documentary: those which are (more or less clearly) intended to make a predetermined point, and those which simply follow the topic, wherever it may lead. I find the former, best exemplified by the work of Michael Moore, to be closer to propaganda. The makers have already decided what the “truth” is going to be, and are intent on convincing the viewer of it, though that’s an attitude more likely to push me away. If you want genuinely to draw me in, don’t decide the destination before your journey of exploration begins. 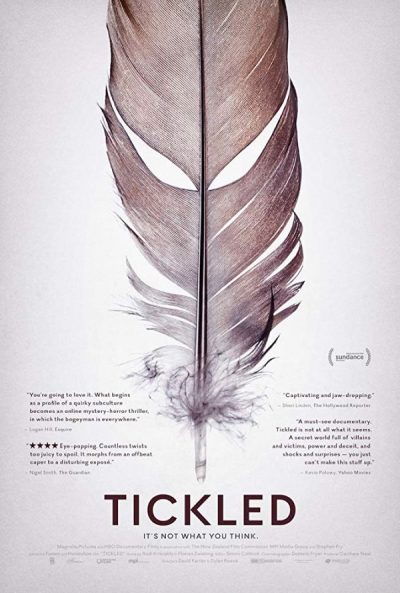 Fortunately, Farrier goes the other way. He stumbles across videos online of “competitive endurance tickling”, ideal for the two-minute quickie human interest stories that are his specialty. But when he inquires politely to the company apparently behind them, he’s greeted first with vitriolic abuse then, as he digs a bit deeper, legal threats. Almost inevitably, rather than being dissuaded, the journalist is intrigued, and so begins a journey into the murky underworld of tickle fetish videos – as well as both those who make and appear in them. Not quite a trip into the heart of darkness, and yet… it makes for a strange trip, to be sure.

We first became aware of Farrier through his subsequent Netflix series, Dark Tourist. There, he comes over as a cross between Karl Pilkington and a low-rent Louis Theroux (indeed, Farrier calls himself the “cheap version” of the latter in one episode), using naïveté to disarm his subjects. I’m thinking it was a bit of a facade, since his approach in this is more doggedly determined and less innocent, as he digs away to find the truth. It’s an enjoyable journey, but it does demonstrate the difficulty with the second style of documentary. Real life and its truth are generally messy, and do not typically have a nice, three-act structure, which can be engineered a lot more easily if you have pre-planned your route.

As the massive scope and significant finances behind the network became apparent, I was imagining it all being some kind of CIA front, conducting research into tickling as an alternative interrogation technique to waterboarding. The reality actually uncovered is nowhere near as interesting, to be honest, and I was left wondering if the end justified the effort. Certainly, the systematic harassment engaged in by “Jane O’Brien Media” deserves exposure. But beyond that, it seems mostly harmless, offering a study in what happens when someone has too much money, unusual interests and time on their hands.

Such is the way of this kind of doc. Even if the final destination is a disappointment without any stunning revelations, the trip can still be a worthwhile experience, if the scenery en route makes it so. That’s satisfactorily the situation here, and the film does a good job of orbiting the nexus between informative (I almost wrote “educational,” which given the subject matter would be a stretch!) and entertaining. Farrier doesn’t lead his subject, he follows it, and the results are all the better for that.