The annual “review the new Ballistic flick” email from Jim arrived, so I hauled ass over to Tempe Cinemas to level my unbiased eye on such things. First up: nice idea to give everyone at the premiere a copy of the film on DVD, though I suspect it is not a concept Hollywood will pick up on anytime in the near future. And we’re talking full-on DVD, with commentary and a 45-minute documentary on Ballistic’s history [Yoshioka’s early work with plastic dinosaurs has to be seen to be believed!] that you should watch before the film, so as to put this into the right context. 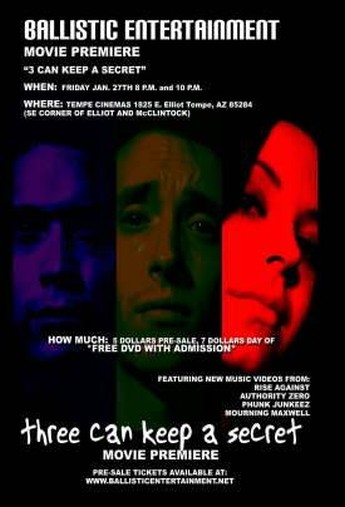 The film centers on three friends, Serena, Nathan and Rob (Berger, Cornwell and Smith), whose relationship is tested by the unfortunate collision of several events. Rob and Serena drift beyond platonic friendship; Serena is raped at the hands of a casual acquaintance; and Nathan encounters her attacker in the restroom of a bar. From here, things spiral down, out of control, and life for none of them will ever be the same again. This is my fourth Ballistic review, and it’s certainly the best performances yet, with all three of the leads very effective: it may take a little while to warm up to these characters, but I certainly did.

I particularly liked the contrast between the nerdish Nathan and jockesque Rob, forced by circumstance to co-operate while simultaneously battling for Serena’s affections. But the highlight is probably a conversation between the three in a garage, round which Yoshioka’s camera relentlessly circles. It’s a great combination of fine acting and cinematic technique that works on multiple levels. Also helping is the audio quality in general, distinctly improved on previous Ballistic work, and rarely sounding like it was recorded in a bathroom. Except the scenes that are recorded in a bathroom, of course.

Criticisms? The soundtrack is bland to irritating; the limited number of extras are often painfully apparent [I saw Yoshioka at least three times!]; some dialogue doesn’t fit the characters – especially Rob, who had to handle several lines with “scripted” written all over them; and Zach’s lust for technique sometimes distracts, most notably some pointless visual tricks during the bathroom confrontation. Probably worst of all, the grasp of police procedure is poor. What homicide detective would let the main investigative lead hang around in a newly-discovered murder scene to chat about theories? Or take a potentially vital statement from a witness without asking any more than her first name? With cop shows on every channel, or so it seems, more attention to the script was needed – and low-budget is no excuse there. 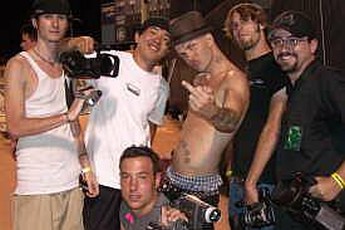 On the whole, though, Ballistic again have turned in something that’s a small marvel. For the first time I’ve seen, the storyline and the performances are both strong, supporting each other well, and – a very important point, especially sales-wise – this is genuine feature-length, something not seen from Ballistic since Synthetic Truth. It has a sense of “anything can happen” that’s not resolved until the final frame, which is surprisingly rare among indie works, and the technical aspects of Zach and his crew continue to improve with every step.