The contrary part of my nature likes the idea of making a film called This is the End the first reviewed here. On this basis, the last one will probably be Friday the 13th Part V: A New Beginning. However, it’s largely a case of fortuitous timing. The DVD had been forcibly lent to me by brother-in-law Leo, and had sat, unwatched, sitting on the DVD player until I finally succumbed to his reminders. [Now, when am I getting season one of 24 back, Leo?] I say “forcibly”, because it wasn’t a film I particularly wanted to see, not least because it contains the ultimate in punchable faces, Michael Cera. I’ve loathed him since his part in the abomination which was Juno, and Scott Pilgrim vs. the World got him on my permanent blacklist. Indeed, I now also avoid Jesse Eisenberg movies t00. It’s the only way to be sure…

However, Leo assured me this was a film I would want to see, because Cera dies horribly. There’s something to be said for watching bad things happen to worse people: the best thing about the House of Wax remake was watching Paris Hilton’s head being impaled. Here, you get to see a selection of Hollywood’s best and brightest (for some loose definition of those terms) meeting their maker, after the apocalypse has the temerity to clash with James Franco’s housewarming party. The survivors – Franco, Seth Rogen, Jay Baruchel and Jonah Hill, with various others dipping in and out – hole up to wait the rescue they are sure is on the way, only for things to go from bad to worse. For this isn’t just an apocalypse; it’s The Apocalypse, full-on Biblical in scale and direction, with demonic entities stalking those unfortunate enough not to have been Raptured out of there. 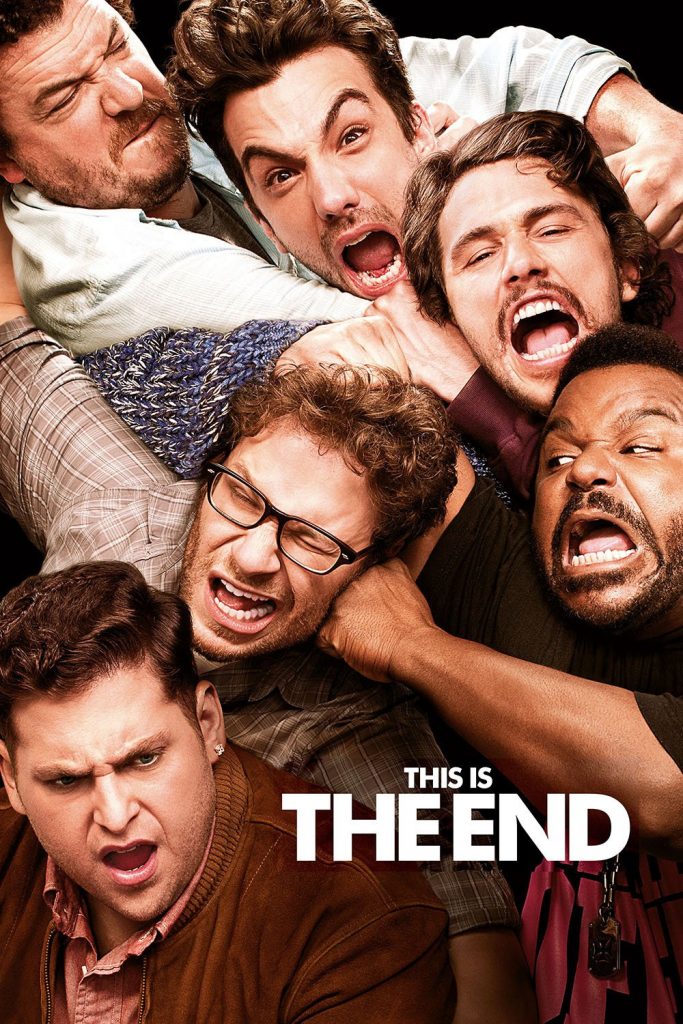 It’s a little bit odd how old-school – or Old Testament – Biblical this is, especially from the guys who gave us the likes of Pineapple Express. We don’t see God at all, but he’s clearly had it up to here with most of humanity, and is happy let them become demon fodder. Jesus Christ? Not mentioned, except for a brief discussion over whether taking his name in vain will impact rapture chances. That’s as close to actual theological discussion as you’ll get, which in some ways is a shame. There’s a potentially interesting angle never discussed: is doing good things, purely in order to get into heaven (as here), actually “good”? Or is it merely the product of blatant self-interest? This plays into the whole question of religion as control mechanism, with an eternity in heaven or hell the ultimate carrot/stick.

As usual with Rogen’s comedy, the film a little too smugly confident that weed is inherently cool and funny. [Personally, I look forward to the day when blunt smoking is as rare in films as cigarette smoking has become] The parade of celebrity cameos wheeled out in lieu of characters becomes wearing too, and it’s a well that’s desperately dry by the point Emma Watson exits, bearing a large ax, and definitely well before the time Channing Tatum is hauled out as Danny McBride’s gimp. It’s a great deal better when simply portraying a bunch of woefully inadequate idiots, trying to survive something for which they are utterly unprepared. I think my first actual laugh here, was the result of a shot of Rogen putting a bit of duct-tape across a gigantic crack in the wall, and the entire section where Jonah Hill is possessed by a demon, along with the subsequent exorcism, is excellent.

This is unquestionably extraordinarily self-indulgent, and that should be apparent, well before the Backstreet Boys show up for the second-campiest song-and-dance number set in cinematic heaven – “Christmas in Heaven” from The Meaning of Life, still holds that crown. This isn’t necessarily a bad thing, but it’s pretty lazy to have people playing little more than exaggerated caricatures of themselves, even if you might not be wrong to claim that has been Rogen’s standard approach throughout his career. However, I cannot argue that Michael Cera does, indeed, die in spectacular fashion, and it’s nice to have another deeply-held religious belief confirmed by the movie – that Cera is indeed the unrepentant asshole he portrays in his movies.