On the way home from their Halloween night partying, Tara (Kanell) and Dawn (Corcoran) encounter a creepy clown. known as “Art” according to the prologue (Corcoran). He follows them to their local pizzeria, and after they leave, slaughters both of the staff. Continuing the pursuit, he kidnaps Dawn, and takes his victim into the near-deserted building where Tara has gone in search of a bathroom. Tara’s sister Vicky (Scaffidi) shows up, in search of her sibling, and becomes another target for Art to terrorize, as do a pair of pest-control operatives, working the building. 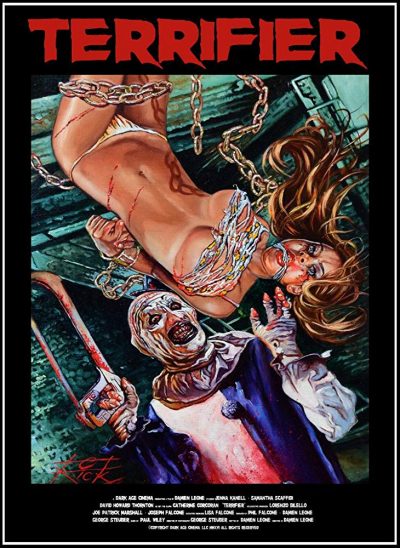 There’s really not much to this, though what it does, it does effectively enough. Initially, it seemed that there might be a bit more than the usual, with the two protagonists coming over as surprisingly well-rounded characters, and Art’s presence not without its moments, especially given his wordless performance. He’s almost more of a psycho mime than a clown. However, once the film goes into full-on slasher mode, it loses what original aspects it had, and becomes little more than another invincible (if extremely dumb) masked killer, running around in search of his victims, without significant imagination or wit. About the only blip is an interaction between Art and a loony resident, briefly hinting at something unusual – before being rapidly discarded in favor of more running and screaming.

Some of the kills are rather good, even if the one which will stick in your mind is an obvious homage to Bone Tomahawk. However, the film manages to botch things by switching focus in the middle, from Tara to Vicky. It’s the kind of leap which you can pull off if you are Alfred Hitchcock; Leone is not, and it feels as if you’ve changed channels and are watching a different movie. You’re given no background on Vicky, or reason to care for her, and as a result, all of her subsequent peril lacks any real emotional impact. It would have helped, had there been some sense of escalation too. Building up to that Tomahawk moment might have worked better, instead of shooting that glorious firework of savage gore off early, then trying (and largely failing) to match it the rest of the way.

On the positive side, Leone keeps the effects nicely practical: cheap physical effects always look better than cheap CGI. He also knows the limitations of his resources, always an important skill at the lower end of budgets. However, Art is about the sole aspect here which has any novelty and, while I can see the point of keeping him mute, in the end his silence probably hurts more than it helps. If you contrast this to something like Circus of the Dead, where Bill Oberst’s performance took the horrific aspects to a whole new level, you’ll understand what I mean. Without words, Art is little if any more than a Michael Myers wannabe – just wearing white facepaint, rather than a white facemask.