I was a little nervous about watching this. I mean, more than two decades had passed since the first movie blazed across the screen in a tornado of drugs, music and pithy snark. A lot of things have changed since. The world has changed. Society has changed. Hell, I have changed. Would Renton (McGregor), Sick Boy (Miller), Spud (Miller) and Begbie (Carlyle) have changed? Of necessity, they must have. Yet the original film’s success was almost entirely reliant on the balance between them, something fragile which could easily be destroyed, particularly by reckless change for change’s sake. 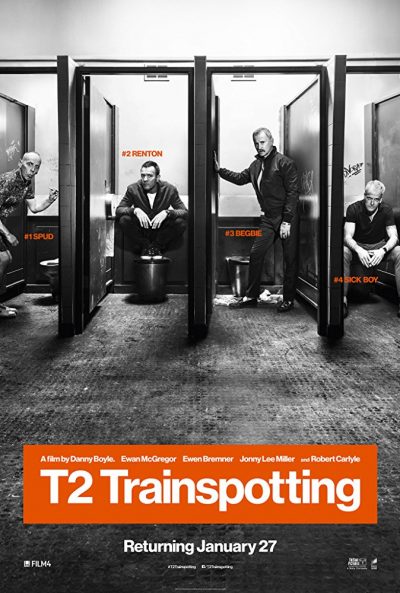 You can breathe easy. Time has not dulled the edges of these characters. Older? Certainly. Wiser? Not so much. Three-quarters of them have at least somewhat matured, the exception being Begbie who, inevitably, is still the same violent psychopath we knew and loved. But even he, we discover, has a wife and son – the latter, much to his father’s horror, is going to college to study… [the shame!] hotel management. It’s really only a sidelight, but gives you some indication of the approach this takes: the more things change, the more they stay the same. For Sick Boy is still a scammer and Spud a gentle idiot.

It’s Renton who kick-starts things. He has been living in Amsterdam after absconding with most of the drug-deal proceeds in the original film. A heart-attack gives him a new “lust for life”, as it were, and he returns to Edinburgh to make peace with his pals. He’s no longer a heroin addict, but his marriage has failed and he’s at a dead-end. He links up with Sick Boy, now running blackmail scams with his Bulgarian girlfriend, and they join forces on a scheme to open a brothel and make a bogus application for an EU development grant – though Renton doesn’t realize that Sick Boy still holds a grudge about his friend’s earlier betrayal.

Boyle does a good job of treading the difficult line between having respect for the original, without toppling over into reverence. It doesn’t have quite the same sense of not giving a flying fuck, but that’s a reasonable enough reflection of the way time marches on. The characters all have the weight of responsibility, and that tends to act as an an anchor. However, Renton’s new-found freedom from work and marriage still allows him to drag Sick Boy into trouble. Most notable is a theft from a Protestant social club which ends up involving an impromptu vocal performance, reminiscent of Borat’s Throw the Jew Down the Well from The Ali G Show. It’s epic, hilarious tastelessness – “…there were no more Catholics left.” [Very catchy, too. Is it available as a ring-tone?] And the scene makes the core point of the film: you can’t live in the past forever.

Compared to the original, there is additional plot here, which is not necessarily a good thing, and I’d like to have seen more of Kelly McDonald – she shows up for a quick cameo as a lawyer. Probably inevitably, it falls a little short when trying to recapture the intensity of its younger, rawer self; then again, don’t we all? It’s at its best when not trying, accepting the fact that what’s past is past, and looking forward to a future that remains as uncertain and doubtful as it ever did. “Choose updating your profile, tell the world what you had for breakfast and hope that someone, somewhere cares.” The more things change, indeed.