Hitch-hiking his way back from France, British guy Jack (Simpson) rescues French girl Véronique (de La Baume) from the clutches of another driver, and the two agree to pair up. For there’s safety in numbers, considering the area through which their passing is the territory of an uncaptured serial killer – or “serious killer” as Véronique charmingly refers to them. Their next lift comes from Grizard (Pierrot), who invites them back to his chateau for dinner and a good night’s sleep indoors. Despite Véronique’s qualms, Jack accepts. But it isn’t long before they discover Grizard and his American wife, Mary (Crampton), have got more than their share of issues. Jack wakes up the next day to discover Véronique has gone. But it’s okay, says Grizard. Look! She left a note! 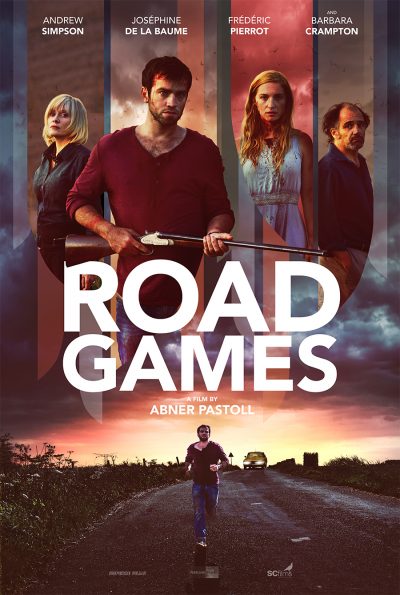 Yeah… The main problem here is the blatantly obvious way in which Grizard and Mary are set up as Definitely Being Very Strange. They’re either the least subtle serial killers in cinema history or the least subtle red herrings. I won’t spoil the film by telling you which, but either way, it has to be seen as entirely predictable. I will say I guessed the main twist about 25 minutes before the end, and I’m usually not very good at that (to the film’s credit, the secondary twist did come as a surprise, albeit in a way which was more, “Oh. I guess that makes sense,” than any degree of startlement or shock). It’s a film in desperate need of some subtlety. Hell, any subtlety.

Another problem is dialogue which switches from English to French and back again, sometimes in the middle of a sentence. It’s an irritating affectation, and you’re probably better off just putting on the subtitles and going with those.  Strike three would be the way the entire French countryside appears to consist of two houses, both inhabited by people several baguettes short of a pique-nique. For once things kick off, the poor protagonist to whom everything happens – look, I’m putting far more effort into avoiding spoilers than this film deserves – bounces between the two locations like some kind of human shuttlecock, rather than heading off in another direction.

On the plus side, nice to see Crampton again, and her performance is actually one of the deeper and better ones here: right to the end, you’re never sure whether Mary is a perpetrator, a victim or an innocent bystander. I also really enjoyed the end credits music, and will be checking out more work by Carpenter Brut down the line: the electronic rhythms kept me there through until the entirely pointless coda which tacked on an opening for an unnecessary at best sequel. Perhaps those vaguely Goblin-esque tones suggest Pastoll was trying to make a French giallo? It would explain the, uh, “deliberately loose” plotting, shall we say. And probably also the general sense of dissatisfaction I felt at the conclusion of events.