Ah, the wisdom of Alan Jay Lerner, who may well have been talking about this movie, which also tries to follow the philosophy attributed to Goebbels: “If you repeat a lie often enough, people will believe it.” In this case, the latter is exemplified by a hellaciously over-frequent use of captions to try to convince the viewer that Nevada is actually a “PLO Fuel and Ammo Depot near the Syrian border.” Saying it doesn’t make it so, any more than pointing the camera at a desk and captioning it, “CIA office, Beirut.” makes that true – though the automatic weapons hanging on the wall behind the desk there, are a nice touch. 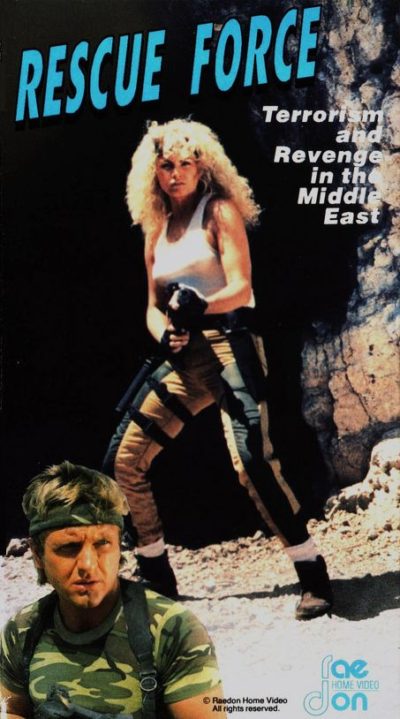 The other defining factor of the badmovie style here is a throwback to the days of a high mistress of the genre, Doris Wishman, who couldn’t afford to shoot sync sound, so had entire conversations showing the backs of people’s heads. The same problem affects things here, but Nizet takes a somewhat different approach, getting his actors to mask their mouths with telephones. A lot. No, really: the first half an hour of the film is a rarely-broken string of phone calls, the chief CIA agent, whom the script never bothers to name, shuffling agents around Europe as if playing a game of Diplomacy on crack. Which is where the “Show me” thing comes in. At one point he tells Lt. Col. Steel (Gritz), “The trade center next to the embassy? Blown up about 30 minutes ago – there are bodies all over the place. Both of our choppers were taken out with bazooka shells not less than 10 minutes ago.” A potentially great set-piece, turned into three sentences of bland monologue.

CIA headquarters in Tel Aviv  gets another needless caption, the wall here having a world map on it, so clearly the nexus of a geopolitical organization. We start on a topless beach in Cannes, where Kiki (Smith) and her breasts are “observing” a terrorist yacht, her boss demanding, “Don’t give me any problems, only questions.” Er.. What? From there is through Paris, Liege, and finally, “Wiskey Pete’s” [sic] resort – actually in Nevada, but still getting a misspelled caption, to convince us of its verisimilitude. Steel calls agent Angel there, ordering her to fly to Paris,  join Candy, go to Brussels. pick up Kiki, then head back to Paris to meet a guy called Striker. What? Checking my notes, Kiki had already been ordered (in yet another phone-call) to London. And wasn’t that to meet Striker? I’m so confused. Why can’t everyone meet in one place? Angel whines there are no cars at the resort, so the only way to the airport is a Flight For Life air ambulance (!). I presume the mention was payback for loaning the production a helicopter elsewhere, and Steel charmingly tells her to get going “before I order you up a hot fudge enema.” But it doesn’t help Candy’s case that, as the ‘copter takes off, one of those non-existent cars is clearly visible in the background

As far as I can work it out, the story is based on an escalating series of incidents between the terrorists and the CIA. After the former get their “Fuel and Ammo depot” blown up – or, at least, there’s a red cast from off-screen implying this – they kidnap a CIA agent and he has to read a statement in the middle of the desert. Bizarrely, he’s given a desk to sit behind, in the middle of nowhere: I was half-expecting, when he’d finished, for the camera to pan across to a tuxedoed John Cleese, behind his desk, who’d say, “…and now for something completely different.” Instead, he’s executed by an equally-unnamed female KGB agent, who appears to be channeling Dyanne Thorne from the Ilsa movies, right down to her problems with pronunciation, e.g. “InfilItrated.” Unaware he’s already dead, the CIA launch a rescue mission, which represents the first big action sequence. However, it fails miserably, mostly because it consists of 10 minutes of the following elements, edited together randomly:

This is so incoherent, it’s unclear who wins, and only on the post-operation call does the audience discover, “we lost four of our main agents in the attack.” I was genuinely surprised by this. Undaunted, the CIA then hits a terrorist boss at his place of meditation, but this only provokes them further. One of the other leaders reveals, “I was keeping this for later but let me tell you, we do have a nuclear weapon in our hands, in the United States.” Ah, I know where this is going. It’ll end up in a race against time to stop Las Vegas from being nuked: it’s in Nevada, so be easy to film, and what better place to represent the decadent West? Er, wrong. This rogue nuke is never mentioned again. Instead, they kidnap the American ambassador to Israel and his daughter – again, despite them being “heavily guarded,” we don’t see their capture, only them being walked up to the cave that’s the “Arab” terrorist lair. I use quotes because, as the image on the below left shows, Nizet is apparently happy to stick a tea-towel on anyone’s head, and call them middle Eastern. 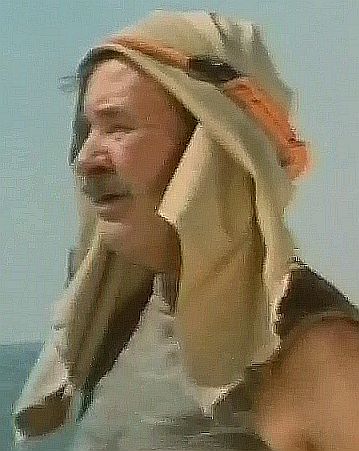 We’ll skip over a few scenes, since there’s nothing much of interest, except for the director proving he’s actually shooting in Paris for realz, guyz, by making sure the Eiffel Tower is visible in just about every shot. Everyone eventually convenes in the Middle East, where Steel runs through the plan of attack. If Gritz actually sounds fairly convincing when playing this part of his role as a military adviser – actually, it’s just about his entire role – it’s because he’s a former Lt. Colonel in the US Special Forces. He’s an interesting guy, has twice run for President, was reputedly the model for Hannibal Smith on The A-Team, and was one of the best speakers we saw at Conspiracy Con 2002. Mind you, he does clearly refer to the terrorists at one point as “the LPO”, but maybe he’s just not a fan of the London Philharmonic Orchestra. But just in case you weren’t clear on the plan, it’s gone over, in painstaking detail yet again, once they hit the ground.

To the film’s credit, the climactic attack is slightly better-constructed than its predecessor. It has more or less the same elements, but they are at least assembled into a coherent order, which progresses the story. Admittedly, it takes the snatch squad about five minutes to make their way through the “ten miles” of caves and knock off the single guard (!) watching over the prisoners. Needless to say, despite using the ultimate terrorist weapon, the non-ironic fist-pump, the evil villains are vanquished, and American hegemony in the Middle East comes out, triumphant again.

After one final, meaningless caption, for old time’s sake (“Near Cannes France – Kiki and Angel’s favorite restaurant”), the pair head off to Whiskey Pete’s, pausing only to plug its “great food.” The casino is still open, should you care to visit, and has Bonnie and Clyde’s death car on display. Fairing less well is said “favorite restaurant,” Le Logis Sarrazin in Gourdon, which has some staggeringly bad reviews: 32 out of 35 rating it as “terrible,” at time of writing. There, they hot-tub with a random other character, and Nizet throws us a last, desperate attempt to generate tension, with a mysterious figure heading towards their room. I won’t spoil the ending, even though the director does his very best to sabotage it himself, with any tension derailed by the staggeringly poor use of musical cues, which appear to have been edited with a rusty butter-knife. It’s the final ignominy, and a fitting way to end this abominable excuse for a film. You may not like it – no, make that, “will not.” Hell, for large chunks, it’s actually boring as hell. But there are enough moments of mad idiocy here, that you will remember it.