Boll’s most critically-approved movie is currently scoring a 6.4 on the IMDB, though not everyone was impressed – I particularly liked the review there which said the film, “WALLOWS LIKE A FILTH ENCRUSTED SWINE DROWNING IN ITS OWN FECES.” And, yes, it was in all-caps. I’m going to use that line one of these days, but it won’t be here, as the film deserves praise for a relentless and unflinching portrayal of a one-man killing spree in a small town. It’s carried out by Bill Williamson (Fletcher), a 23-year old mechanic who has some issues – but, perhaps more interestingly, has a meticulous plan, both for the carnage and how it’s all going to end. He starts of by taking out the local police station, using a van packed with explosives, then picking off the remaining cops nearby, and only then turns his attention to the local civilians… 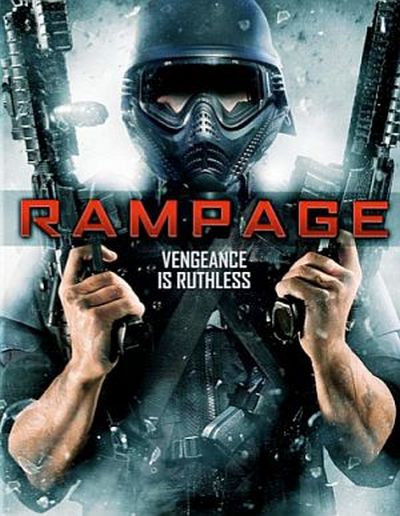 The film is only peripherally interested in the motivations for his actions. Bill doesn’t have a particularly bad life: he’s not bullied, the biggest problem in his life is his parents (politely) getting him to move out, and he doesn’t even appear to have the obvious cheap cop-out of playing violent video games or whatever. That may actually be one of the movie’s strengths, as any such explanation would inevitably fall short of the mark, so it’s perhaps best not even to bother. His ‘normality’ also makes the slaughter all the more uncomfortable, as there’s nothing obvious to separate and distance the killer from the viewer. Instead, he’s just like us – it’s a bit like Falling Down in that respect, particularly in the ‘bad service’ scene both films share.

Beyond that, however, it does lack much satirical edge, despite a delightful scene where Bill arrives in a local bingo-hall and… things don’t unfold as you’d expect. Mind you, having played that game, what transpires did have me nodding in acknowledgment of its plausibility and pitch-black humour. In contrast, the sequence in the beauty parlour is simply wrong – as an aside, it’s definitely worth hunting down the uncut version of the movie, which runs about five minutes longer, a good chunk of which seems to happen in the parlour. Having seen that scene in both versions, the uncut packs about ten times the wallop: I believe the ending may also be different.

Speaking of which, does the ending, with its twist, ring entirely plausible? No, though I can’t get into dissecting it in depth, for reasons of spoilage. Still, that, along with the overuse of not-very-Steadicam, are probably the biggest weaknesses; at least the shakycam doesn’t have the brutal force multiplier of frenetic editing, to make things even worse. [Chris still declined to view this one] But overall, this goes into a place that not many films have ventured, and contains more than enough scenes which will stick in your mind. It’ll be a while before we can pluck up the courage to suggest that our son moves out…