After local authorities start an investigation into a local Satanic cult, coven leader Mother Gautere (Tota Alba) opts for a spot of self-defenestration, plunging to her apparent death through a police-station window. However, the considerably more photogenic new leader (Kali Hansa) takes revenge, luring out Susan (Salgado) the daughter of the district attorney who opened the investigation, and giving her a teddy-bear with a Satanic relic sewn into its stomach. It’s not long before the previously angelic Susan has turned into a foul-mouthed brat who sulks around the house all day, and refuses to do anything her parents tell her. Or, as we call it, “being a normal teenager,” hohoho. 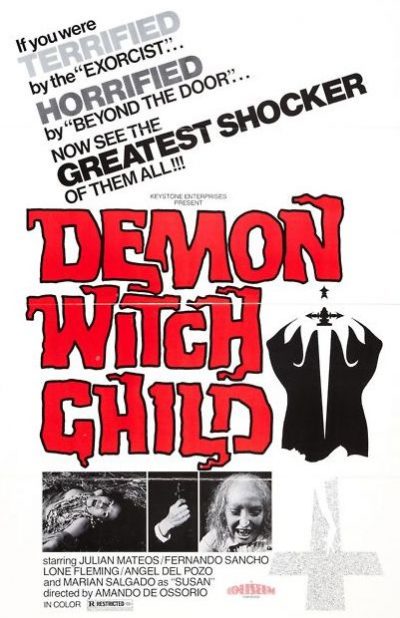 What’s probably less normal is Susan speaking in the voice of Mother Gautere, arguing with the local priest (Mateos) over his vows of celibacy, and severing a man’s genitals, in order to present them to his girlfriend, nicely gift-wrapped. For all this was clearly inspired by the success of The Exorcist (and it was far from the only Euro-knockoff to take that route), the film does at least add sufficient of its own creation, to make for a marginally worthwhile experience. de Ossorio’s reputation is largely based on Tombs of the Blind Dead, about zombie Knights Templar, which I must confess I have never seen. However, this doesn’t exactly spur it to the top of my list, the direction here being some distance from notable, although in his defense, it’s hard to tell the kind of performance he’s getting from his actors, when the dubbing is so poor. Susan, in particular, has a voice about half her apparent age.

In tone and content, it seems to feel about a decade older than it is, more in line with the Dennis Wheatley adaptations Hammer made, such as The Devil Rides Out. By the point in the mid-seventies where this came out, we had already seen a far more adult take on Satanism in The Wicker Man, and even Hammer had figured out that Gothic horror was no longer sufficient for a seventies audience. They’d go back to Satanism the following year, with To The Devil a Daughter, and that was also considerably more explicit. The ropey make-up effects (as shown above), a kid with a potty-mouth and a spot of levitation aren’t enough to make much impact, leaving the self-description on the poster as “the greatest shocker of them all” inaccurate enough to merit investigation by any passing consumer advocate organizations.

However, this is one of those cases where taking a film out of its contemporary era can help, if you can mentally assign it to a period in time, where the movie better fits. It isn’t always possible; if the fashions are relentlessly mid-seventies, say, it’s hard to time-shift a film out of that decade. This is not the case here, and if you treat it as a piece of sixties cinema, it will feel more acceptable. You probably will still want to ignore the tedious subplot about the priest and his crisis of faith though.