Seth (Monaghan) is on the bus home from his job at a pet shelter when he sees former school-mate, Holly (Solo). She spurns his clumsy advances, and does not take well to his continued pursuit. So, what’s a rejected stalker to do? If you guessed, “Drug Holly with animal tranquilizer, and keep her caged in the unused basement of his facility, in a initially dubious attempt to ‘save’ her,” you would be correct. However, things are not as straightforward as they seem, because Holly has considerable mental issues of her own, as Seth has discovered from reading her journal, and we discover from Holly’s subsequent conversations with her flatmate. 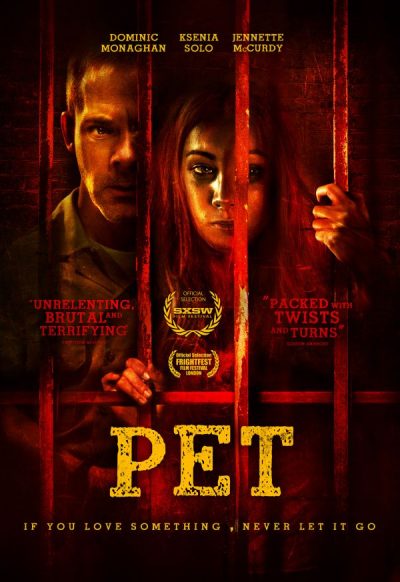 It’s an interesting concept, focusing on the psychological battle for dominance between a captor and a captive. Imagine along the lines of Silence of the Lambs, if Clarice were also a serial killer. It also does a decent enough job of subverting audience expectations, in particular taking you from sympathy for Seth to creepy disgust, then walking at least part of the way back from there. But it’s never quite as convincing as it needs to be, in order for this all to work. For example, when Holly orders Seth to cut off one of his own fingers, to prove his devotion to her, you need to be fully assured of his dedication to her, and the script hasn’t taken you far enough down that road. There were also some glaring plot-holes: given he doesn’t have a vehicle, how did Seth get the unconscious Holly from her apartment to the shelter? Call an Uber?

The performances by the two leads are able to overcome some of the weaknesses in a plot, even if the age difference makes the idea of them being high-school classmates hard to swallow. Both Monaghan and Solo have to play characters who have multiple facets, with a public persona sharply at odds with what they do in the shadows, and are generally successful. Solo is particularly good, switching from pleading victim to making insistent demands – whatever she feels will be most effective, towards her goal of manipulating Seth into letting her out of the cage.

It’s when the movie broadens out from focusing on this pair that it struggles. There’s a security guard at the shelter, who is remarkably oblivious to what’s going on. And while the film does eventually address the time Seth is spending with his “pet”, it still seems a stretch to believe this facility sits on top of underground storage space which appears more appropriate to a government nuclear bunker. These kind of things could easily have been fixed with a few, relatively small tweaks to the script. Instead, their presence proves damaging beyond their weight, because of the way they took me out of the dark reality the film is trying to craft. It’s something of a shame: the leads deserve more for their conspicuous efforts in the service of the movie.