Anyone who has watched B-movies in the past 20 years will likely have seen their share of Madsen, who appears never to have met a pay-check he didn’t like. I say this not in a spirit of criticism, because while often not very good, these films are almost all better for having him. So thank you for your efforts, Michael; I fully understand you have a family to keep and bills to pay. He filed for bankruptcy in 2009, citing debts of $4 million; had a warrant out two years later for unpaid child support; and settled with the IRS for $640,000 in 2013. You pretty much have to keep working in those circumstances. 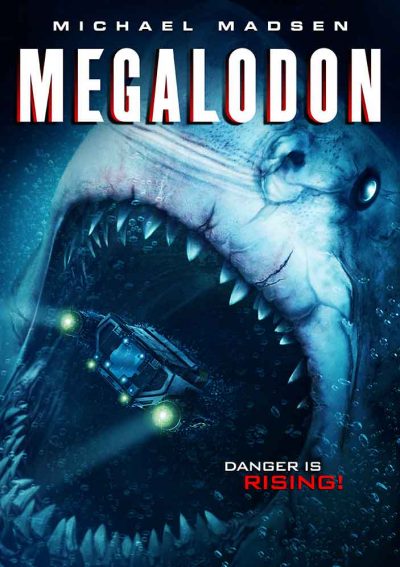 Yet he seems ashamed of his life as a jobbing actor, telling The Guardian as far back as 2004, that he was appearing in “these horrifying straight-to-video things for very little money.” While he has expressed similar emotions elsewhere since (2016: “When people offered me work, it wasn’t always the best, but I had to buy groceries and I had to put gas in the car.”), I’m hard pushed to look at his filmography and detect any uptick in quality, resulting from his apparent disdain for the field. But, hey: any actor can have a rough decade. Or two. For this is one of twelve films the IMDb lists Madsen as appearing in this year already.

If it sounds familiar, 2002 saw a video release by that name. It was also the sub-title on Shark Attack 3, a movie infamous for an early appearance by John Barrowman, in which he delivers the line, “What do you say I take you home and eat your pussy?” And confusingly, The Meg is known as Megalodon in Spanish-language territories. This Asylum version supersizes its shark. While the “real” Megalodon topped out around 60 ft, the one here gobbles down whales whole, like they were breadsticks. We first meet it tearing into a Russian sub on an espionage mission, which comes to the attention of a U.S. Navy vessel under Captain Streeper (Pace).

He sends his second-in-command, Commander Lynch (Harris) to investigate in her drone. She rescues three survivors, including Captain Ivanov (Mikitas), commander of the sub, only for the drone to become shark food on their way back to the surface, I’m sure there’s a joke in there about swallowing seamen. Streeper goes against the orders of Admiral King (Madsen), staging a rescue mission, and the giant creature then turns its anger onto their ship, for some ill-explained reason. Meanwhile, the Russians escape custody and start running around, which is possible because the entire destroyer has a crew of about 12. No, seriously: at the end of the film, they literally all fit in a single life-boat. Those defense budget cuts are clearly worse than I thought.

There’s just not enough sharkarnage in this one. When you’ve got a creature roughly the size of a football field, it needs to be creating mayhem of equivalent volume, rather than just occasionally banging its face off the side of the boat. It kills hardly anyone after semi-accidentally drowning the Russkies at the beginning – two people in a pleasure boat is about the extent, though admittedly, scalewise nutritionally, we’d be roughly equivalent to a piece of trail mix. Various crew members instead get electrocuted, killed by the Russians or bravely sacrifice themselves, just not eaten. So, really – what’s the point? The performances are actually pretty good, with Pace giving things more gravitas than they likely deserve, and they keep this watchable. Still, it’s a sluggish way to start Sharknado Week, with a disappointingly passive monster.