Only very tangentially related to the original Kill Zone, this has Wu and Yam returning from that – albeit playing different characters – but loses Sammo Hung as the villain, and Donnie Yen as the kick-ass protagonist. At least in the latter department, we get Jaa instead, who delivers the bone-crunching exploits we’ve come to expect. But in terms of storyline, it’s an absolute mess, to the point where I got about 30 minutes in, and opted to look up the Wikipedia synopsis. Fortunately, it did a better job of explaining what the hell was going on, than the script had. 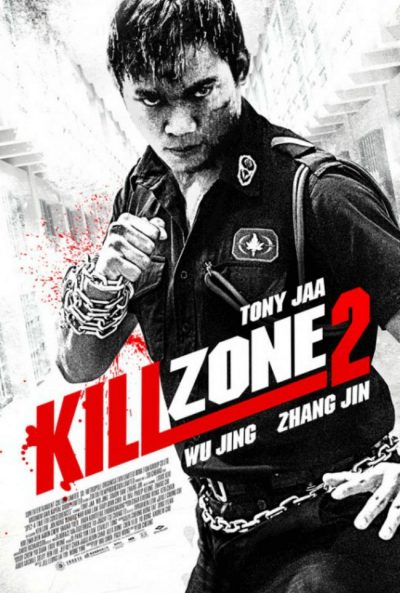 Kit (Wu) is an undercover cop, investigating an organ-smuggling ring run by Hung (Koo). The criminal has a particularly vested interest in the business, as he has a heart condition, so is in desperate need of a transplant. Turns out, the only possible donor is his brother, so Hung tries to kidnap his sibling. Warned by Kit, the police rescue the brother, but Kit ends up captured by Hung and locked up in a Thai prison under another identity. Which is where Chatchai (Jaa) comes in: he’s a guard there, but wouldn’t you know it, his daughter needs a transplant too. Oh, yeah, and the donor she desperately needs, turns out to be Kit. What are the odds?

Yeah, if you’re not rolling your eyes at the above, you (understandably) weren’t paying attention. It’s not even the first kung-fu medical flick; back in 1991, Wong Jing made The Last Blood, about the desperate search to protect the one donor in Hong Kong, possessing a blood type compatible with the target of a Japanese Red Army assassination attempt. It was no less daft than this, but did at least have some self-awareness. Shoehorning in the “sick child” angle here, is such obvious emotional manipulation, the results are inevitably short of effective, and at almost two hours long, over-stuffed with it.

The redeeming merit is, as you would expect, the action, with a number of impressively crisp set-pieces. Though even here, we went back and watched the original film’s efforts immediately after finishing the sequel, and they were definitely superior. This is most particularly true with the final battle which, in this case, ended in a way that actively had us wondering what had happened, before suddenly jumping to a coda set quite some time later. However, there is one amazing sequence – both in terms of action, and in cinematography – set in and around a prison riot, that showcases everyone’s talents to great effect.

Cheang may not know his way around a story, but it’s clear he does know where to point a camera, and bonus points for the unusual use of classical music during some of the fights. It’s not the sort of thing you’d think should work, yet somehow, it does. It still isn’t enough to save this though, and it’s a film you are probably better off leaving on in the background, while you do something else between the fights. The return on your actual attention is likely not enough to justify the additional investment.